Exploring the Lower Limb of the Atlantic Meridional Overturning Circulation 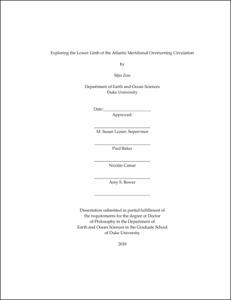 The Atlantic Meridional Overturning Circulation (AMOC) is characterized as a northward upper limb that carries warm near-surface waters from southern latitudes to the subpolar North Atlantic, and a southward lower limb that transports cold deep waters back to the southern latitudes. Due to its special role in distributing heat, carbon and water masses globally, AMOC as an essential part in the climate system, has long been a strong focus within the ocean community. For decades, AMOC variability has been attributed to changes in deep water production at high latitudes in the North Atlantic through a geostrophic response in the Deep Western Boundary Current (DWBC), the assumed major export pathway of the deep waters. However, recent Lagrangian studies have revealed the importance of eddy-driven interior pathways, challenging the traditional DWBC-dominated spreading pattern, hence the linkage between deep water formation and AMOC. Under the new spreading scheme of the deep waters, this dissertation provides an extended Lagrangian analysis on the spreading pathways of two major deep waters, Labrador Sea Water (LSW) and Iceland Scotland Overflow Water (ISOW), and re-examines the relationships among deep water production, deep water export and the strength of AMOC.

In a combined Lagrangian and Eulerian frame, a first comprehensive description of ISOW spreading branches in the eastern North Atlantic is presented with observational data and output from an eddy-resolving ocean model. The major export pathway for ISOW is shown to be the southward branch into the Western European Basin, instead of the branch through the Charlie Gibbs Fracture Zone, the traditional DWBC pathway. Interestingly, these two branches show compensating relationships in the model, a result assumed to reflect these pathways’ interactions with the North Atlantic Current in magnitude and/or position shift.

Finally, with output from ocean circulation models and an ocean reanalysis dataset, the meridional connection of the deep water transport anomalies and their relationships with AMOC are assessed. It is shown that deep water transport anomalies in the subpolar gyre do not propagate coherently to the subtropical gyre in general, particularly so for Upper North Atlantic Deep Water (UNADW, containing LSW). Furthermore, while UNADW and Lower North Atlantic Deep Water (LNADW, containing overflow waters) transports in the subpolar gyre are linked to local AMOC strength on interannual to decadal time scales, in the subtropical gyre only LNADW transport variability shows this linkage, the latter results consistent with observations. These analyses suggest a dominance of gyre-specific, rather than basin-wide, mechanisms for water mass transport variability. Thus, latitudinal coherence in AMOC is likely unrelated to continuity in water mass transport anomalies. An exception to this generalization is possible with strong LNADW transport events.

Taken together, this dissertation emphasizes the importance of interior pathways to the export of deep waters from the subpolar to the subtropical gyre. It also reveals a tenuous linkage between deep water production and AMOC strength at subtropical latitudes on interannual to decadal time scales.