Emotional Responses and Mother-Infant Interactions of Mothers with Early-Preterm, Late-Preterm, and Full-Term Infants in Malawi 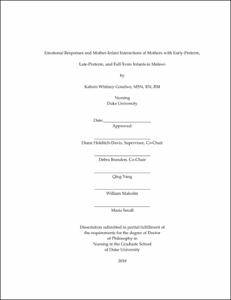 Malawi has the highest preterm birth rate in the world and preterm birth contribute to more than one-third of the neonatal deaths annually. Malawi is also faced with limited resources, both human and material. The lack of incubators led to the adoption of Kangaroo Mother Care (KMC) as routine care for preterm infants. Families also provide support, physical and emotional during this entire period. Evidence from developed countries has shown that preterm birth contributes to maternal emotional distress (depressive, anxiety, and posttraumatic stress symptoms and maternal worry about child’s health) and fewer maternal and infant interactive behaviors. The majority of published research globally has also focused on early-preterm infants and little research has been done on late-preterm infants. Studies in Malawi have also largely focused on postpartum depression and no published literature could be located on mother-infant-interactions. The purpose of this study was to explore emotional distress and mother-infant interactions of mothers with early-preterm, late-preterm, and full-term infants in Malawi.

This mixed method study and three-part investigation was conducted at Queen Elizabeth Central Hospital. The first part of the investigation was translation and validation of the Perinatal PTSD Questionnaire and the Child Health Worry Scale as measures for posttraumatic stress symptoms and maternal worry about child’s health, respectively. I conducted a focus group discussion with Malawian nurse-midwives (N=8) to assess content of translations in relation to original. I also tested the instruments on mothers in the perinatal period (N=30; 10 mothers of early-preterm infants, 10 mothers of late-preterm infants, and 10 mothers of full-term infants). Validated instruments from first phase were used in the second phase of the study. The second phase of the investigation compared emotional distress and mother infant interactions among 85 mother-infant dyads (28 mothers with their early-preterm, 29 mothers with their late-preterm, and 28 mothers with their full-term infants). Baseline assessments were done following birth for the three groups and follow-up assessments were conducted for mothers of the preterm groups. I also recorded and coded videos of mothers and infants to assess mother-infant interactions. The third phase of the investigation was qualitative (N= 19; 7 mothers with early-preterm infants, 7 mothers with late-preterm infants, and 5 mothers of full-term infants) and explored maternal perceptions of sources of concerns and social support following birth of their infants. In-depth interviews were conducted at the end of the study.

Findings showed that mothers of early-preterm infants experienced higher levels of emotional distress than mothers of full-term infants, with mothers of late-preterm infants being intermediate between the two. Cesarean birth was also associated with more anxiety and depressive symptoms. Kangaroo Mother Care had minimal effects on the change of emotional distress in mothers of the preterm groups. However, KMC interruptions were associated with an increase in emotional distress. Minimal differences were seen in mother-infant interactions among the mothers and infants of the three groups. KMC had no impact on the interactive behaviors. Mothers’ concerns during infant hospitalization were personal and family factors; prenatal and perinatal experiences; infant illness, treatments, and appearance; concerns about the infant’s outcome; loss of parental role; health care workers and the healthcare system; infant care including breastfeeding concerns; and provision of KMC. Types of support received during the hospitalization included instrumental/tangible support, emotional support including spiritual support, and financial support. Mothers also preferred to have their own family as their caregivers during hospitalization.

Future studies need to focus on longitudinal methods to explore whether emotional distress experiences change over time and also to explore maternal and infant interactive behaviors as the babies mature. The Malawi healthcare system needs to provide support for mothers throughout the prenatal and perinatal period in order to lower maternal distress symptoms and promote positive mother-infant interactions.