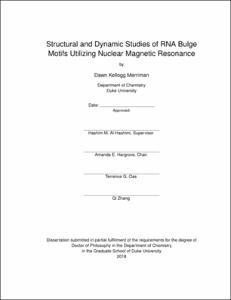 Bulges are ubiquitous building blocks of the three-dimensional structure of RNA. They help define the global structure of helices and points of flexibility allowing for functionally important dynamics, such as binding of proteins, ligands and small molecules to occur. This thesis utilizes a battery of nuclear magnetic resonance (NMR) methods and a model system of RNA bulge motifs, the transactivation response element (TAR) RNA from the human immunodeficiency virus type 1 (HIV-1), to characterize the dynamic energy landscape of bulges. Specifically investigating how it varies with bulge length, divalent cations, and in the presence of epi-transcriptomic modifications.

The impact of more broadly varying the length of the TAR poly-pyrimidine bulge (n = 1, 2, 3, 4 and 7) on inter-helical dynamics has been studied across a range of Mg2+ concentrations. In the absence of Mg2+ (25 mM monovalent salt), n 3 bulges adopt predominantly unstacked conformations (stacked population <15%) whereas 1-bulge and 2-bulge motifs adopt predominantly stacked conformations (stacked population >85%). The 2-bulge motif is biased toward linear conformations and increasing the bulge length leads to broader inter-helical distributions and structures that are on average more kinked. In the presence of 3 mM Mg2+, the helices predominantly coaxially stack (stacked population >75%), regardless of bulge length, and the midpoint for the Mg2+-dependent stacking transition does not vary substantially (within 3-fold) with bulge length. In the absence of Mg2+, the difference between the free energy of inter-helical coaxial stacking across the bulge variants is estimated to be ~2.9 kcal/mol, based on an NMR chemical shift mapping approach, with stacking being more energetically disfavored for the longer bulges. This difference decreases to ~0.4 kcal/mol in the presence of 3 mM Mg2+. It is proposed that Mg2+ helps to neutralize the growing electrostatic repulsion in the stacked state with increasing bulge length thus increasing the number of co-axial conformations that can be sampled.

N6-Methyladenosine (m6A) and N1-Methylpurine (m1A and m1G) xx or just refer to m1G?xx are post-transcriptional RNA modifications that are proposed to influence RNA function through mechanisms that can involve modulation of RNA structure. m6A is thought to modulate RNA structure by destabilizing base pairing. Here, it is shown that m6A can stabilize A-U base pairing and overall RNA structure when placed within the context of a bulge motif. m1A has also been shown to potently destabilize RNA duplexes due to their inability to favorably accommodate Hoogsteen base pairing. It is shown that such Hoogsteen base pairs can form in RNA when placed in the context of a bulge motif.

Taken together, the studies show that the dynamic energy landscape of polypyridine bulges is highly robust with respect to changes in bulge length allowing for gradual variations in the population and energetics of common conformations. Mg2+ plays an important role in smoothening these variations most likely by diminishing electrostatic contributions that could vary significantly across bulges of different length. The results also show that the structural impact of epi-transcriptomic modifications can be greatly altered relative to duplex RNA when targeting bulge motifs.