Rewriting Dante: The Creation of an Author from the Middle Ages to Modernity 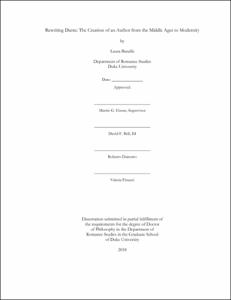 Rewriting Dante explores Dante’s reception and the construction of his figure as an author in early lyric anthologies and modern editions. While Dante’s reception and his transformation into a cultural authority have traditionally been investigated from the point of view of the Commedia, I argue that these lyric anthologies provide a new perspective for understanding how the physical act of rewriting Dante’s poems in various combinations and with other texts has shaped what I call after Foucault the "Dante-function” and consecrated Dante as an author from the Middle Ages to Modernity. The study of these lyric anthologies widens our understanding of the process of Dante’s canonization as an author and, thus, as an authority (auctor & auctoritas), advancing our awareness of authors both as entities that generate power and that are generated by power. By addressing the creation of his authoritative figure from its inception, this study sheds light on cultural production, both as a collective, almost anonymous, process and as a result of the intervention of prominent (and less prominent) individuals. By concentrating on the part of Dante’s oeuvre that may be considered less authoritative, that is, his lyric poetry, my study emphasizes aspects of the “Dante-function” that go unobserved when focusing exclusively on the Commedia.

This research interweaves the critical discourses related to the emergence of the author in the Late Middle Ages (Minnis, Ascoli, Auctor et Auctoritas) and the birth of the songbook as a literary genre (Barolini, Bertolucci Pizzorusso, Galvez, Holmes), also touching on the twentieth-century alleged ‘death of the author’ (Barthes, Foucault, Benedetti). I concentrate on the crucial function of editors and anthologists as mediators in the canonization of Dante through the material construction of manuscripts and books. This question has led me to explore canon making as a structure of power and the interplay of cultural hegemonies in its creation. I approach this problem through the lens of material philology because it is a productive interdisciplinary methodology, as is seen in the work of historians of the book McKenzie and Petrucci, and literary critics Eisner, Storey, and Nichols.