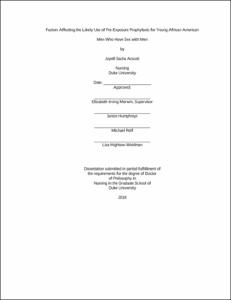 African-American young men who have sex with men (YMSM) are seven and three times more likely than their White and Hispanic counterparts, respectively, to be infected with HIV. Once-daily oral co-formulated tenofovir disoproxil fumarate and emtricitabine [FTC/TDF], for HIV pre-exposure prophylaxis, known as PrEP has been demonstrated to be an effective method of reducing rates of new HIV infections within this population. Despite this breakthrough in HIV prevention, African American YMSM use PrEP at a much lower and disproportionate rate in comparison to white MSM. Therefore, the aim of this dissertation was to develop a deeper understanding of the HIV prevention needs of African American YMSM as it relates to PrEP. This study was conducted using a descriptive qualitative approach, which was guided by a naturalistic design to explore and understand African American YMSM’s cognitive and emotional processes as it relates to PrEP, and how these responses influence their likely future use of PrEP as an HIV prevention method. The findings revealed important individual-, social-, cultural-, and structural-level factors that affect African American YMSM’s likely future use of PrEP. These findings revealed opportunities for future research and interventions to address the disparate rates of future PrEP use for African American YMSM.