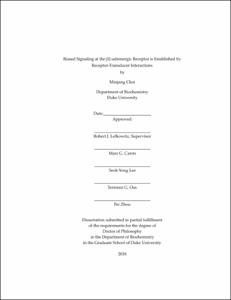 β-Adrenergic receptors (βAR) are one of the key modulators of cardio-pulmonary functions and belong to a large family of membrane proteins, termed as G-protein coupled receptors (GPCRs). β-blockers (βAR antagonists) and βAR agonists are the mainstay treatments for heart failure and asthma respectively, which reflects the significance of βARs as therapeutic targets. The binding of catecholamines (e.g. adrenaline) to βARs activates intracellular transducer proteins such as hetero trimeric GTP binding proteins (G-proteins) or β-arrestins (βarr), which results in the regulation of cardiac output and bronchodilation.

The bifurcated signaling pathways initiated by G-protein and β-arrestin downstream of βAR, as well as other members in the GPCR family can be selectively activated, a phenomenon termed as ‘biased agonism’. Biased ligands, which can pharmacologically separate these pathways, are of major therapeutic interest due to their potential for improving the specificity of drug actions. For βAR, biased agonism towards β-arrestin is expected to render cardo-protective benefits, while selective activation of G proteins is hypothesized to subdue major side effects from current asthma therapy. Therefore, elucidation of how βARs can preferentially interact with their transducers is at the core of developing the next generation therapeutics, beyond conventional β-blockers and agonists.

Thus far, the exact mechanism behind GPCR biased agonism remains obscure. The leading hypothesis in the field is that GPCRs adopt distinct conformations that preferentially couple to G proteins or β-arrestins. In order to test this hypothesis, we developed and established a G protein biased mutant β2AR (Chapter 2), since efficacious biased ligands for this receptor are yet to be found. Subsequent assessment of GPCR kinase (GRK)-mediated phosphorylation states of this mutant receptor and phosphorylation rescue experiments revealed unexpected findings that contradict the initial hypothesis (Chapter 3). Next, we initiated a biophysical characterization of this mutant β2AR (Chapter 4) to comprehend the conformational and structural basis for its apparent biased phenotype. The cumulative insight gained from experiments described in chapters 2-4 highlight the underappreciated role of GRKs in determining GPCR biased agonism – the mutant β2AR is biased towards G protein due to conformational selection against GRKs, rather than β-arrestins. Furthermore, to obtain a comprehensive understanding of biased agonism, we devised a strategy to map the interface between β2AR-β-arrestin, which can also be used to form stable complexes for further biophysical characterizations (Chapter 5). In summary, this dissertation improves the current understanding of the molecular mechanism behind biased agonism at the prototypical GPCR, β2AR.