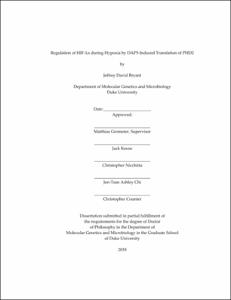 Death associated protein 5 (DAP5) is an atypical isoform of the translation initiation scaffold eukaryotic initiation factors 4GI and II (eIF4GI/II), which recruit mRNAs to ribosomes in mammals. Unlike eIF4GI/II, DAP5 binds eIF2β, a subunit of the eIF2 complex that delivers methionyl-tRNA to ribosomes. Despite extensive work describing eIF4GI, an understanding of DAP5 activation is yet to be described.

Here I describe our discovery that DAP5:eIF2β binding is regulated by DAP5 phosphorylation and can be stimulated by specific stimuli including protein kinase C PKC-Raf-ERK1/2 signals, mitosis and hypoxia, wherein DAP5:eIF2β binding determines DAP5’s influence on global and template-specific translation. However, DAP5 depletion causes an unanticipated surge of hypoxia-inducible factor 1α (HIF-1α), the transcription factor and master switch of the hypoxia response. The hypoxia response is tempered through HIF-1α hydroxylation by the oxygen-sensing prolyl hydroxylase-domain protein 2 (PHD2), and subsequent ubiquitination and degradation. Furthermore, we found that DAP5 regulates HIF-1α abundance and Akt signaling through DAP5:eIF2β-dependent translation of PHD2. DAP5:eIF2-induced PHD2 translation occurs during hypoxia-associated protein synthesis repression, indicating a role as a safeguard to reverse HIF-1α accumulation and curb the hypoxic response implying that DAP5:eIF2β binding may describe a conserved mechanism for selective stress induced translation.