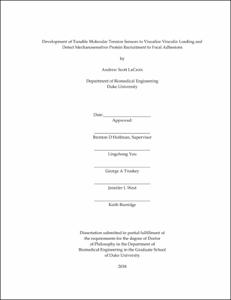 Mechanical forces are potent drivers of many biological processes. The form and function of many tissues depends on cells receiving the proper mechanical signals either from neighboring cells or from the underlying matrix. During development, dynamic tissue movements are driven by cell contractility and stem cell fate depends in large part to the mechanical forces they feel in their local surroundings. Conversely, aberrant mechanosensitive signaling is associated with the pathological progression of several disease states, such as cancer and atherosclerosis, for which effective treatments are scarce. As such, understanding how cells physically interact with and detect mechanical aspects of their microenvironment is critical to both understanding developmental processes and developing new treatments for disease.

Mechanical information from the microenvironment is converted into biochemical signals inside cells through molecular scale processes, collectively referred to as mechanotransduction. Many of the events associated with mechanosensitive signaling and mechanotransduction are mediated by force-dependent changes in protein structure and function. However, the lack of available tools to study these molecular scale processes in cells is currently preventing further progress. To address this need, the goals of this dissertation were to (1) improve upon and expand the capabilities of existing tools to visualize molecular forces and (2) develop novel methodologies to detect force-sensitive signaling events inside cells.

We began by focusing on the further development and improvement of one of the most critical tools to mechanobiological investigations: Förster Resonance Energy Transfer (FRET)-based molecular tension sensors. While these sensors have contributed greatly to our understanding of mechanobiology, the limited dynamic range and inability to specify the mechanical sensitivity of existing sensors has hindered their use in diverse cellular contexts. Through both experiments and modeling efforts, we developed a comprehensive biophysical understanding of molecular tension sensor function that enabled the creation of new sensors with predictable and tunable mechanical sensitivities. We used this knowledge to create a sensor optimized to study the ~1-6pN loads experienced by vinculin, a critical linker protein that plays an integral role in connecting cells, via focal adhesions (FAs), to the extracellular matrix (ECM). Using this optimized sensor enabled sensitive detection of changes in molecular loads across single cells and even within individual FA structures. We also expanded the capabilities of tension sensors to investigate the potentially distinct roles of protein force and protein extension in activating mechanosensitive signaling. Specifically, a trio of these new biosensors with distinct force- and extension-sensitivities revealed that an extension-based control paradigm underlies cellular control of vinculin loading.

Since these sensors uniquely provide insight into which molecules are physically engaged and could be participating in mechanically-based signaling, we chose to investigate which cytoskeletal structures mediate patterns of vinculin loading at multiple length scales within the cell. Specifically, we focused on two active, but distinct force generating machineries inside cells: stress fibers (SFs) and lamellipodial protrusions (LPs). By measuring vinculin tension in various mechanical and biochemical contexts, we found significant evidence for vinculin’s involvement in force transmission from both LP and SF structures. However, the distribution of loads across vinculin at the level of a single FA was dramatically different between these two distinct actin structures. Specifically, asymmetric distribution of vinculin load along individual FAs was an exclusive feature of SF-associated FAs. Subsequent experiments showed that formation and maintenance of these gradient loading profiles also depends on vinculin’s interactions with key binding partners, suggesting that both the magnitude as well as the pattern of vinculin loading within FAs are independently regulated by cells, and thus might serve distinct purposes in cellular mechanosensing.

Towards understanding the biochemical consequences of protein load at the molecular level, we developed an imaging-based technique to detect one of the events most often implicated in mechanically-based signal transduction: the formation of force-sensitive protein-protein interactions (PPIs). While these force sensitive interactions have been extensively documented in vitro, the extent to which they occur inside living cells is debated. This imaging-based technique, which we refer to as fluorescence-force co-localization (FFC), involves simultaneous FRET imaging of a FRET-based tension sensor to visualize protein loading and correlate this with the recruitment of other species to areas of high molecular loads. With vinculin as a prototypical example and a screen-based approach in mind, we used immunofluorescence to measure the relative enrichment of 20 other key FA proteins in areas of high vinculin tension. Factoring in what we previously learned about (1) the importance of actin architecture and (2) the well-established role of vinculin alone in controlling FA composition, we provide a multiparametric perspective on a potential mechanotransduction node associated with high vinculin loads. Focusing on the top five hits from this FFC screen, subsequent experiments revealed a genuine vinculin tension-dependent interaction with migfilin. While the involvement of both vinculin and migfilin in cardiac settings is a tempting line of future work, the work presented in this dissertation even more powerfully provides a proof-of-principle for the detection of force-sensitive PPIs in cells.

In total, the techniques developed in this dissertation enable detection of multiple molecular events associated with mechanotransduction inside cells. The improvement of FRET-based tension sensors as well as the ability to define their mechanical properties a priori should expedite investigations of molecular forces in diverse biological contexts. Additionally, the realization of force-dependent PPIs inside cells provided by the FFC screen constitutes a significant step towards uncovering mechanically-based signaling mechanisms inside cells. The more widespread application of these tools will undoubtedly fuel our understanding of mechanotransduction and could enable better control of cell behaviors in engineered tissues as well as the development of treatments for mechanosensitive diseases.