Understanding the Organization, Location, and Interactions of Actin-based Structures During Drosophila Dorsal Closure 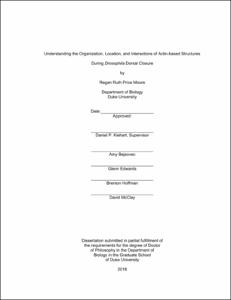 Epithelial sheet morphogenesis is characterized by dynamic tissue movements, resulting in the recognition and adhesion of cells to generate a seamless epithelium. Each step is mediated by carefully organized, cellular actin structures, including contractile purse strings, cellular protrusions, and dynamic medioapical arrays. I used live, 4D imaging to observe Drosophila dorsal closure, a model of epithelial sheet morphogenesis. I compared four fluorescently tagged F-actin probes widely used by Drosophila researchers to determine which was optimal for imaging dorsal closure. I observed differences in the intensity of the probes and the viability of the stocks that carry them. I quantified the rate of closure and the oscillatory behavior of amnioserosa cells when embryos expressed each F-actin probe. My findings demonstrated that each probe can be used to image F-actin during dorsal closure, and that the effects of probe expression make one probe more or less suitable than another for answering specific questions. I investigated the structure, kinematics and location of medioapical, actomyosin arrays during dorsal closure. I resolved medioapical arrays in vivo at the level of individual cytoskeletal components using total internal reflection structured illumination microscopy (TIRF-SIM). In concert with lattice light-sheet images, I show that when amnioserosa cells are relaxed, actin and myosin form a loose, domed meshwork that protrudes apically from the cellular junctions to which they are anchored. As the amnioserosa cells contract, this meshwork condenses, rearranges and is drawn basally towards the plane of the junctional belts. As the cells relax, so too does the actin and myosin meshwork in a new configuration. The medioapical arrays are juxtaposed to the plasma membrane and continuous with the extending lamellipodia and filopodia. Thus, medioapical arrays are modified cell cortex.