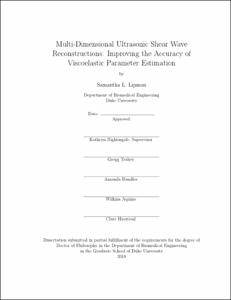 Curvilinear transducers are the standard probe used in ultrasound HCC screenings; however, previous studies using curvilinear arrays performing liver SWEI have been limited by penetration depth of the acoustic radiation force excitation. In order for SWEI to be feasible as an imaging method to screen for and detect HCC lesions, large, low frequency arrays designed for deep abdominal imaging must be used. A prototype low frequency deep abdominal curvilinear array and a proposed low frequency matrix array were simulated, and the combined dynamic on-axis response in the region of excitation (ROE) and the propagating shear wave (off-axis) response were used to create quantitative shear wave images of a spherical lesion using sparse acoustic radiation force excitations. The on-axis behavior in the ROE is related to the underlying stiffness of the material and a lookup table (LUT) approach can be used to determine a SWS in this region. Combined with traditional off-axis TOF methods, the combined methods can reduce the sparsity that would otherwise occur inside the ROE, which allows a larger field-of-view (FOV) to be interrogated with the same number of excitations. The on-axis and off-axis methods can be combined in either 2-D or 3-D reconstructions. The performance of the deep abdominal curvilinear array was comparable to the matrix array for 2-D SWEI imaging. A benefit of the curvilinear array over a large matrix array is its ability to image through intercostal acoustic windows. If there is not a sufficient subcostal acoustic window to use the matrix array to image the entire liver, a combination of both the matrix array and the curvilinear array can be used to scan the entire organ.