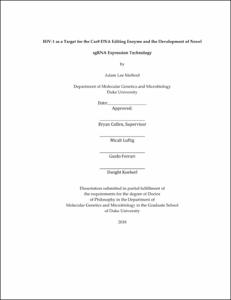 The CRISPR/Cas system has emerged as a powerful tool for the precise modification of DNA in mammalian systems. In addition to the robust utility of Cas9 loaded with its cognate single guide RNA (sgRNA) to modify cellular DNA targets, there is great interest in using this system to target the DNA of viral targets. Human immunodeficiency virus type 1 (HIV-1) remains a major human pathogen with currently no curative therapy available and serves as an ideal target for disruption through CRISPR/Cas. Indeed, multiple reports have demonstrated the effectiveness of the CRISPR/Cas system to impair the ability of HIV-1 to successfully replicate. However, there is now evidence that this repression is not permanent, with HIV-1 being to escape Cas9-mediated inhibition through mutation of the target site. Here, we demonstrate through in vitro cell culture assays that not only is CRISPR/Cas an effective tool to inhibit de novo HIV-1 infection and that cleavage of the proviral DNA occurs both before and after integration, but that targeting of the highly conserved TAR stem-loop structure can prevent HIV-1 breakthrough replication.

In addition to targeting HIV-1, multiple reports have demonstrated the effectiveness of targeting other DNA viruses in vitro. There is now significant enthusiasm for translating these studies into an in vivo setting. Thus, the development of vector technology that can effectively deliver the Cas9 and sgRNA components to target cells in vivo is of critical importance. The most likely vectors for these studies would be adeno-associated virus (AAV) vectors due to their potent ability to transduce various tissue types in vivo. Unfortunately, AAV vectors are hampered by a strict packaging limit and, given the large size of the Cas9 protein, technology that can aid in overcoming this barrier is necessary. Here, we characterize a novel and compact method of sgRNA expression using tRNAs as promoters. With this method, the sgRNA is initially transcribed as a long precursor transcript that is subsequently cleaved by tRNAse Z, liberating the mature sgRNA where it is loaded into Cas9. Importantly, these sgRNAs are able to guide Cas9 to a target sequence to an equivalent degree compared to sgRNAs expressed from a canonical, and substantially larger, U6 promoter. These findings should greatly facilitate the development of AAV vector technology that can efficiently deliver CRISPR/Cas components to target cells for in vivo studies.