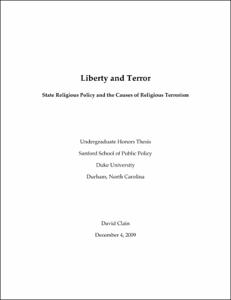 View / Download
444.6 Kb
Date
Author
Clain, David
Repository Usage Stats
335
views
452
downloads
Abstract
For decades, and in particular since the attacks of September 11, 2001, political scientists and policymakers have sought to understand the causes of terrorism. The policy rationale is clear: if we can identify the correlates of terror, we can eliminate the underlying factors that lead to terrorist behavior instead of relying on myopic intelligence and policing efforts. An extensive body of past research has done little to identify these underlying factors, which are generally referred to as “root causes.” The most commonly proposed correlates of terror are poverty, a lack of education, and inequality. Other suggested factors are modernization and urbanization, fractionalization by ethnicity, language, and religion, and political repression. These proposed factors have been cited as gospel by some policymakers. The most prominent example is President George W. Bush’s March 2002 justification for his Administration’s foreign aid package: “We fight poverty because hope is an answer to terror.” But carefully compiled empirical data have cast serious doubt on the hypothesis that poverty leads to terrorism, and policymakers seem to have taken notice. More recently, the absence of religious freedom has been promoted as a causal factor in the rise of terrorism. This quite clearly influenced President Bush’s international religious policy, which was designed to undermine the radical ideology that gives rise to Islamic terrorism. This emphasis has continued for years, with a State Department official confirming in 2005, “the United States steadfastly believes that respecting religious freedom is a vital antidote to terrorism.” This prompts an important question: is religious repression to blame for violent fundamentalism? Some anecdotal evidence suggests so, as most of the terrorists who have attacked American interests in recent years have come from countries where religious liberty is limited. This is certainly not sufficient evidence to justify the recent bluster from politicians, but in the absence of rigorous empirical analysis, anecdotes have carried the day. This paper attempts to determine whether terrorism in general and religious terrorism in particular truly are associated with the absence of religious freedom and pluralism.
Description
Public Policy Studies Honors Thesis
Type
Honors thesis
Department
Public Policy Studies
Subject
religious freedom
causes of terrorism
islamic terrorism
Permalink
https://hdl.handle.net/10161/1695
Citation
Clain, David (2009). Liberty and Terror. Honors thesis, Duke University. Retrieved from https://hdl.handle.net/10161/1695.
Collections
More Info
Show full item record