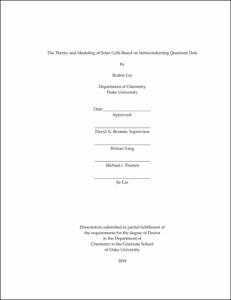 We developed tight-binding electronic structure models to explore the QD electronic properties, and the charge transfer kinetics including their dependences on QD sizes and QD surface-to-surface distance. We found that the QD-QD charge transfer rates follow the non-adiabatic rate expression by Marcus. The QD-QD electronic coupling strength decays exponentially as the QD surface-to-surface distance increases. The QD-QD charge transfer rates generally increase (decay) as the acceptor (donor) QD radius increases. We found that the TS coupling mechanism can dominate the QD-QD coupling over the TB coupling. The difference between the TS and TB coupling size dependences results in a dominance switch between the TS and TB charge transfer mechanisms in the QD dyad as the QD sizes grow.

Using the computed charge transfer rates, we explored the power conversion efficiencies of QD solar cells based on QD dyads and QD triads. We found that the external and internal power conversion quantum efficiencies are significantly enhanced by introducing a third QD between the donor and acceptor QDs. The improvements in the efficiencies can be further enhanced by tuning the band-edge energy offset of the middle-position QD from its neighbors.