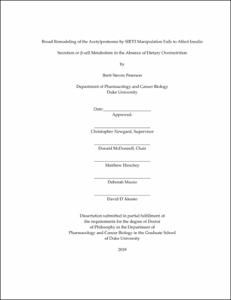 SIRT3 is an NAD+-dependent mitochondrial protein deacetylase purported to influence cellular and systemic metabolism through modulation of the mitochondrial acetylproteome. Fuel-stimulated insulin secretion from pancreatic islets involves mitochondrial metabolism and might be susceptible to SIRT3-mediated effects. To investigate this idea, we used CRISPR/Cas9 technology to obtain complete SIRT3 knockout in the INS-1 832/13 insulinoma cell line. In the context of this SIRT3 knockout cell line, we re-expressed wild-type SIRT3, β-Galactosidase, or one of three enzymatically inactive mutant forms of SIRT3 to generate lines representing a wide range of SIRT3 expression and mitochondrial protein deacetylase activity. We performed large-scale acetylproteome profiling by mass spectrometry on the different lines, and observed wide-spread, SIRT3-dependent changes in acetylation of enzymes involved in fatty acid oxidation, the TCA cycle, and the electron transport chain. Remarkably, despite these broad changes, the cell lines had indistinguishable insulin secretion responses to glucose or pyruvate, and exhibited no differences in function or viability in response to metabolic or ER stress-inducing agents. Moreover, metabolomic profiling revealed that, when compared to SIRT3-null cell lines, expression of wild-type SIRT3 does not result in appreciable changes in a host of organic acid, amino acid or fatty acid-derived acylcarnitine metabolites during glucose stimulation.

We also studied mice with global SIRT3 knockout (KO) fed a standard chow (STD) or high-fat/high-sucrose (HFHS) diet. Importantly, we performed these studies in the C57Bl/6J background in which we replaced the mutant allele of nicotinamide nucleotide transhydrogenase (NNT) present in the “J” substrain, with the wild-type allele in order to restore endogenous NNT function. SIRT3 KO and wild-type (WT) mice fed a STD diet exhibited no differences in insulin secretion during oral or IP glucose tolerance tests, and the function of islets isolated from these mice was indistinguishable in islet perifusion studies conducted with a broad array of secretagogues. Only when chronically fed a HFHS diet did SIRT3 KO animals exhibit a modest impairment in insulin secretion, but without an effect on glycemic control. Our broad conclusion is that major changes in mitochondrial protein acetylation in response to manipulation of SIRT3 are not sufficient to cause changes in islet function or metabolism. However, under conditions of chronic nutritional stress (feeding of a HFHS diet for 12 weeks), a negative effect on function appears, suggesting that islets are more susceptible to nutrition-induced factors (oxidative stress, local cytokine production, etc.) when SIRT3 is absent. Further studies will be required to identify factors that may interact with SIRT3 deficiency and mitochondrial protein hyperacetylation to increase the risk of -cell dysfunction.