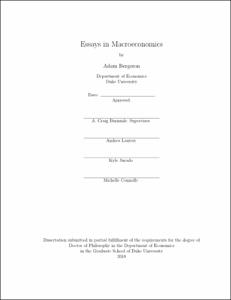 This paper consists of three essays, with a focus on household behavior and decision making. In the first essay, I consider a two asset lifecycle model with transaction costs and show that allowing individuals to learn about their idiosyncratic skill (and therefore their future income distribution) over time yields starkly different asset allocation and overall savings decisions by households as compared to a more restricted income process typically considered in the literature. Using parameters estimated from the same underlying income data as the standard process, I show that a model with learning generates more liquid saving over the entire lifetime, suppresses illiquid saving early on, and increases illiquid saving later in the lifecycle.

In the second essay, I examine household financial data from the Survey of Consumer Finances. I show that a model with learning is more easily able to generate sufficient liquid assets to match the ratio of average holdings of illiquid to liquid assets over the lifetime found in the data. I further show that a model without learning requires a risk aversion parameter nearly six times that of the learning model to generate the same ratio. Finally, I show that for a select group of individuals, the marginally propensity to consume out of extra income in the learning model is only 56\% of that of the model without learning. This suggests that introducing learning into the household portfolio problem potentially has large policy implications.

In the third essay, I consider a city-level environment in which individuals search simultaneously for both housing and employment. I construct a model in which the unemployment rate, per capita income, population growth, home prices, home construction rates, and rent are all endogenously determined. I then compare the response of the variables from a labor demand shock to their empirical counterparts. The model has some success qualitatively matching impulse responses from the data.