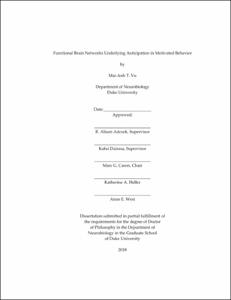 Anticipation is a state of expectancy for something that will happen, and it allows us to use past learning to prepare for and make predictions about the future. Studies have shown that anticipation influences behavioral performance, learning, and memory, and studies implicate reward-related brain circuitry. However, few studies have investigated the neural underpinnings of anticipation on a brain-wide network scale . In this set of experiments, I take an interdisciplinary cross-species approach, using in-vivo electrophysiology in mice and functional magnetic resonance imaging (fMRI) in humans, to investigate brain networks underlying anticipation in motivated behavior. Using a data-driven machine learning approach, I characterize the anticipatory network in mice running through a T-maze, and show how it is affected by behavioral perturbation in the form of a task reversal, and circuit perturbation in the form of a genetic mutant mouse line. I also validate this network in a separate cohort of mice in a variation of the T-maze task that varies in difficulty, and show how activity in this network is modulated by task difficulty and intermediate instrumental goals. Finally, I investigate this network using fMRI in human subjects performing a trivia-based task to show how this network links curiosity, a more intrinsic form of motivation, to memory. The findings from these studies provide evidence at multiple levels and across multiple species for an anticipatory network that links motivational state to cognitive performance.