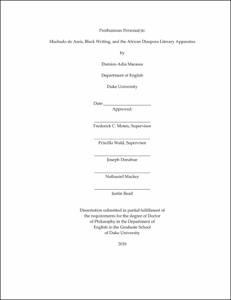 Posthumous Persona(r)e: Machado de Assis, Black Writing, and the African Diaspora Literary Apparatus analyzes the life writings of Machado de Assis (1839-1908) in light of the conditions of his critical reception and translation in English as a basis for scholarly production and pedagogy. The concept of the posthumous and its emergence as a major theme of Machado’s literary production links the dissertation’s independent chapters in exploration of a tripartite topography; the 1) the canon of African American literature; 2) the history of African diaspora peoples; and 3) in his own life and writings.

A simple question motivates the entire project which expands in order to unpack the signifying manners of black texts: “what is writing?” The term “black writing” says no more than the word “writing” in context of a Machadian literary praxis that understands reading as a black thing. I argue, from the standpoints of phenomenology, sociolinguistics, and literary theory that the powers of black writing represent the sine qua non of basic literacy in Machado’s oeuvre and the history of writing itself.

The interrelation of writing, personhood, and posthumousness in Machado’s lifework questions writing through writing, and race through race, meditating on descent and creation in exile. Posthumous Persona(r)e casts a wide theoretical net for the critical overhaul and comparative analysis of his African diasporic contemporaries, illuminating a vast record of archival and spiritual correspondences all housed under the capacious milieu of the posthumous. Ultimate findings on the nature of writing in African diaspora reveal ways in which Machado’s writings and global renown have come to evince the resolute victory of the posthumous over worldly forces, and of what is written over what is effaced, even as his legacy has outlived successive regimes of domestic and international silencing of black individuals and communities.

In attempting to translate subtleties of the Afro-Brazilian cultural, linguistic, and historical matrix, the trajectory of which uniquely distinguish the writings and thought of Machado de Assis, I make references to classic works of criticism, anthropology, religious studies, and ethnography in order to demonstrate under-appreciated modes and traditions of writing fathomed by his literary production. In the course of reviewing notable works and critical trends in Machadian scholarship in the English language and in Portuguese, I offer an overview of significant moments of erasure that Machado's “literary life” have resiliently endured. Tracking poetic and theoretical material in its stylistic development rom the beginnings of his publishing career, in 1854, to the advent of his national fame with the publication of The Posthumous Memoirs of Brás Cubas, in 1881, the dissertation fancies itself a posthumous memoir of his abiding youth.

The study of the conditions under which black writing in the Americas is performed functions as prolegomena to the study of African diaspora literatures in translation from immanent theoretical groundings. Posthumous Persona(r)e finds black writing in the Americas a record of African lifeways and worldviews in diaspora that express coherences of the social and spiritual life shared in common across the imagined borders of self, community, and the living. By referring to works of literature and criticism by Machado de Assis, W.E.B. Du Bois, Frederick Douglass, and James Weldon Johnson in the reading of Machado’s own lifework against the historical backdrop of their respective investments in print culture, a topography of the social network and literary apparatus of the black press comes into view as an historical entity which exists in relation to a social network in the history of quilombo.