Truth to Power: The Politics of Theological Free Speech in the Cappadocian Fathers and Augustine of Hippo 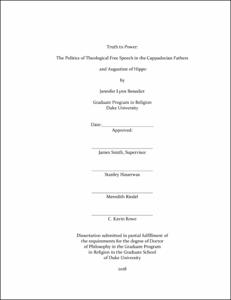 This dissertation investigates the political grammars of truth-telling employed by two sets of early Christian authors, the Cappadocian Fathers (Basil of Caesarea, Gregory of Nazianzus, and Gregory of Nyssa), who wrote in Greek, and Augustine of Hippo, who wrote in Latin. My aim is to describe the rules that these thinkers take to order relations implicated in the Christian’s acts of parrhêsia and confessio before other human persons and before the LORD. To this end, I employ methodology derived from ordinary language philosophy (OLP), which understands the meaning of a word to be constituted by its use within the form of life of a particular community.

In so doing, I argue against the conclusions of Michel Foucault on the politics of truth-telling in the early Christian tradition. Foucault depicts parrhêsia as an act of individual self-expression that belongs to an order of familiar, and fearless relations between the speaker and a God who holds no standards of judgment that the Christian does not always already meet. By contrast, he characterizes confessio as a form of cringing and self-doubting submission in fear that belongs to a hierarchical politics of discipline and punishment in which unnecessary distance is introduced to relations between the Christian and the LORD through the mediation of human authorities.

A far different picture emerges when we look at the grammars of parrhêsia and confessio as these terms were used by the Cappadocians and Augustine within their historical and cultural contexts – the forms of life of their linguistic communities – rather than interpreting them through the lens of our own post-Enlightenment languages and politics. The conceptual grammar of parrhêsia employed by both pagans and Christians required the speaker to calculate her ability to justify and demonstrate the acceptability of herself and her speech on criteria held by listeners, and to use non-verbal means of assuring that what she displayed and disclosed in speaking could meet these criteria. The grammar of confessio, as Augustine presents it, allows speech to serve as a medium through which the speaker can be made righteous and brought into right relationship with the LORD by dispositions of faith, humility, and ecstatic self-dispossession in the act of speaking.