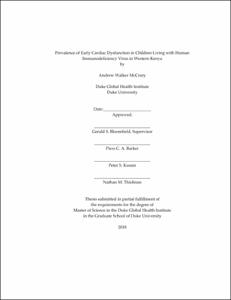 Background: HIV-associated cardiac dysfunction has severe consequences, and traditional measures of echocardiography underestimate disease. Novel echocardiographic measures may detect early disease in time for intervention. The aims of this study are to define the prevalence of early cardiac dysfunction in children living with HIV, and the relationships between cardiac function and same-day plasma HIV RNA levels.

Conclusions: Nearly one quarter of these perinatally HIV-infected children demonstrated echocardiographic evidence of early cardiac dysfunction, based primarily on abnormal MPI measurements. This finding was not correlated with same-day HIV RNA levels or other clinically relevant variables. Further investigation into the clinical significance of this finding is urgently needed as abnormal MPI measurements have been shown to be predictive of heart failure in at risk populations.