Missile Defense within the Context of Extended Deterrence: The Uncertain Security Commitments in the Korean Peninsula 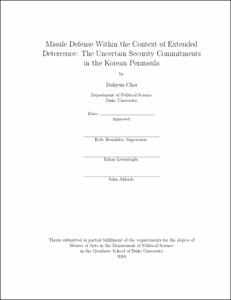 such a missile defense|damage-limiting capability |decreases the vulnerability of

the United States(US) and enhances its security guarantee to allies. However, the

inherent in an extended deterrence remains unsolved. In this paper, I present a game-

installed. Such a discrepancy weakens the credibility of the US security umbrella

is intended to compel the behavior of an opponent. This finding suggests that a