Norovirus Infections and Association with Animal Exposure in Sarawak, Malaysia 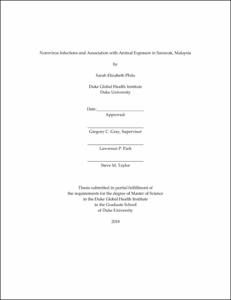 Diarrheal diseases continue to be one of the most significant killers of children throughout the world, and many diarrheal diseases are zoonotic in nature. In Malaysia, not much is known about the viruses causing disease in humans and animals, and there is little evidence describing the role noroviruses play in diarrheal disease in the state of Sarawak. This study aimed to estimate the prevalence of noroviruses in children admitted to Sibu Hospital with acute diarrhea and the prevalence of norovirus in swine environments in Sarawak. We collected stool samples from children admitted to the hospital for acute gastroenteritis and by convenience sampling from registered pig farms. Stool samples were tested for norovirus genogroups I and II/IV. At the time of sample collection, information was collected about prior animal exposure and medical history including previous hospitalization for diarrhea. Of the 70 participants enrolled in the study, 3 tested positive for norovirus G.II/IV. None of the swine stool samples tested positive for noroviruses. None of the animal exposure variables were statistically associated with increased odds of previous hospitalization for diarrhea, but prior cat exposure non-significantly increased the odds of previous hospitalization by 3.78 (95% CI 0.89, 16.11). Although norovirus is not highly prevalent in children in Sibu, Malaysia, diarrheal disease causes significant disease burden in the study population. Future work should aim to elucidate risk factors for severe diarrhea and to determine the prevalence of other disease-causing pathogens. This information will help clinicians better treat their patients and public health officials design programs to minimize the risk exposure to prevent diarrheal disease.