Determinants of Tobacco Initiation among Young People of Palau 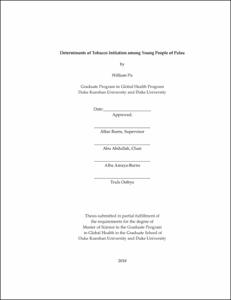 Background: Tobacco control and cessation among the youth in Palau is becoming a chief concern in non-communicable disease control within the Palauan Ministry of Health. The most current research states that the trend of tobacco use and initiation among the youth in Palau is ever-increasing. This study seeks to quantitively and qualitatively explore the exposures to tobacco use in daily life in order to inform future health interventions and programs.

Methods: This study was a mixed methods cross-section study seeking to explore many aspects of tobacco exposure and use among the young people of Palau. Survey questions assessing knowledge, behavior, and attitudes regarding tobacco use were conducted with Palauan youth ages 9 to 18 years across various states of Palau. Three focus groups were also conducted to provide depth to collected qualitative data regarding domains such as tobacco initiation, acquisition, and social exposure. Qualitative analysis was conducted using Stata 14 and qualitative data was examined using Nvivo 11.

Results: 39 individuals participated in the survey portion of the study. Of the 39 participants 18 were tobacco users with the majority of users initiating tobacco use before the age of 12. The most common reason stated for tobacco initiation behavior was peer pressure and curiosity. With regard to smoking cigarettes, 82% of respondents believed it causes great harm. Whereas only 43.6% of respondents believed that chewing betel with tobacco caused great harm. Over half of ever users of tobacco (57.1%) had at least one friend who uses tobacco. Methods of tobacco acquisition, perception of tobacco use harm, tobacco imitation reasons, and tobacco exposures in daily life were themes collected from focus group discussions.

Conclusions: This study offers insight into certain characteristics of tobacco users, tobacco initiating behavior in young Palauans, attitudes and beliefs towards tobacco, as well as methods of tobacco acquisition. The results of this study emphasize a need for stricter regulation and enforcement of the tobacco policies which are in place. Though knowledge regarding the harms of tobacco are relatively high, there are still misconceptions that exist in understanding the harms of tobacco. One of the intentions of this study is to provide insight to further inform future health interventions targeting young Palauans which use tobacco. Further research should be implemented within this topic in order to fully understand the nuances and intricacies which surround the role of tobacco in the lives of young Palauans.