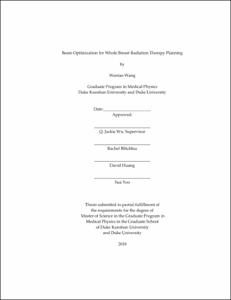 Purpose: To develop an automated program that can generate the optimal beams for whole breast radiation therapy (WBRT).

Methods and Materials: A total of twenty patients receiving WBRT were included in this study. The computed tomography (CT) simulation images and structures of all 20 patients were used to develop and validate the program. All patients had the breast planning target volume (PTV) contour drawn by physicians and radio-opaque catheters placed on the skin during CT simulation. First, an initial beam was calculated based on the CT images, the radio-opaque catheters, and the breast PTV contour. The beam includes five main parameters: the gantry angles, the isocenter location, the field size, the collimator angles, and the initial multi-leaf collimator (MLC) shape.

To optimize the beam parameters, a geometry-based objective function was constructed to optimize target coverage and organ-at-risk (OAR) sparing. The objective function is the weighted sum of the square of the relative volumes of the PTV outside the field and the ipsilateral lung inside the field. Due to the curvature of the chest wall, a portion of the ipsilateral lung will be included in the irradiated volume. The balance between PTV coverage and OAR sparing is embodied by the relative weight of the lung volume in the objective function, which was trained and validated from the clinical plans of the twenty patients. Two different optimization schemes were developed to minimize the objective function: the exhaustive search and the local search. The search was conducted in a 2-dimensional grid with the gantry angle (1° increments) and the isocenter location (1 mm increments) as two axes and the initial beam as the origin point. For the exhaustive search, the ranges of the gantry angle and the isocenter location are ±12° and ±21 mm. The local search does not require a search range. The beam with the minimal objective function value in the grid is considered optimal. The optimal beam was transferred to an in-house automatic fluence optimization program developed specifically for WBRT. The automatic plans were compared with the manually generated clinical plans for target coverage, dose conformity and homogeneity, and OAR dose.

Results: The calculation time of the beam optimization was under one minute for all cases. The local search (~15 s) took less time than the exhaustive search (~45 s), and the two methods produced the same result for the same patient. The automatic plans have overall comparable plan quality to the clinical plans, which usually take 1 to 4 hours to make. Generally, the PTV coverage is improved while the dose to the ipsilateral lung and the heart is similar. The breast PTV Eval V95% of all cases are above 95%, and the mean V95% (97.7%) is increased compared with the clinical plans (96.8%). The ipsilateral lung V16Gy is reduced for 14 out of 20 cases, and the mean V16Gy is decreased in the automatic plans (12.6% vs. 13.6%). The average heart mean dose is slightly increased in the automatic plans (2.06% vs. 1.99%).

Conclusion: Optimal beams for WBRT can be automatically generated in one minute given the patient’s simulation CT images and structures. The automated beam setup program offers a valuable tool for WBRT planning, as it provides clinically relevant solutions based on previous clinical practice as well as patient specific anatomy.