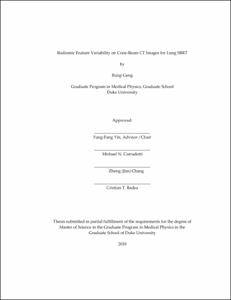 This study aims to (1) investigate methodology for harmonization of radiomics features between planning CT and on-board CBCT and establish a workflow to harmonize images taken from different scanning protocols and over the course of radiotherapy treatments using normalization, and (2) examine feature variability of longitudinal cone-beam CT radiomics for 3 different fractionation schemes and a time-point during treatment indicative of early treatment response.

Of 72 NSCLC patients treated with lung SBRT, 18 received 15-18 Gy / fraction for 3 fractions; 36 received 12-12.5 Gy / fraction for 4 fractions; 18 received 8-10 Gy / fraction for 5 fractions. We studied 7 sets of CBCT images from the same treatment fraction as a ‘test-retest’ baseline to study the additional daily CBCT images. Fifty-five gray level intensity and textural features were extracted from the CBCT images. Test-retest images were used to determine the smallest detectable change (C=1.96*SD) indicating significant variation with a 95% confidence level. Here, the significance of feature variation depended on the choice of a minimum number of patients for which a feature changed more than ’C’. Analysis of which features change at which moment during treatment with different fractionation schemes was used to investigate a time-point indicative of early tumor response.

Normalization can potentially harmonize radiomics features on both planning CT and on-board CBCT. Feature variability depends on the selection of normalization VOI and extraction VOI. Significant changes in gray level radiomic features were observed over the course of lung SBRT. Different fractionation schemes corresponded to different patterns of feature variation. Higher fractional dose corresponded to a larger number of variable features and high overlap of variable features at an earlier time-point.