Understanding the Barriers and Potential Solutions to Epilepsy Care in Uganda: A Qualitative Study 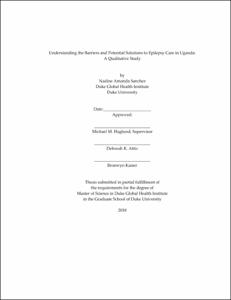 Introduction: Epilepsy is one of the most prevalent neurological diseases in the world. In Sub-Saharan Africa, people with epilepsy frequently seek treatment from traditional or pastoral healers, who are more accessible than biomedical care providers. This is problematic because it often contributes to a time delay preventing patients from obtaining adequate biomedical care. In Uganda, biomedical providers who treat epilepsy are also available, including neurologists and psychiatrists. This study sought to elucidate the barriers to biomedical care for people with epilepsy as well as identify potential solutions to overcome these barriers.

Methods: The study used qualitative research methods. Semi-structured interviews and focus group discussions were conducted with four major groups: patients with epilepsy or family members of patients with epilepsy, neurologists and psychiatrists, pastoral healers, and traditional healers. All interviews and focus group discussions that were in English were audio recorded and transcribed verbatim into English. Those that were not in English were translated live and audio recorded. A translator later translated the audio recording to ensure proper transcription into English. Two independent coders coded the dataset and conducted an inter-rater reliability assessment to ensure reliable coding of the data. Thematic analysis was then performed to elucidate themes from the data and to compare nuances in the themes between each of the study design groups.

Results: Participants in this study discussed several different causes of epilepsy ranging from spiritual to biological causes, but often incorporating elements of both. Common spiritual causes of epilepsy included witchcraft and ancestral spirits. Common biological causes included genetics, fever, malaria, and brain injury. For patients and families, beliefs about the cause of epilepsy often played a role in whom they chose to seek treatment from.

Three major barriers to biomedical care were discussed: practical barriers, barriers relating to medical infrastructure, and barriers related to stigma against people with epilepsy. Practical barriers included logistical barriers such as transportation, cost of medical care, and distance to the nearest healthcare facility. Under medical infrastructure, drug stockouts and lack of access to anti-epileptic drugs were the most consistent problems stated amongst patients. Stigma was heavily discussed and brought up by nearly every participant. Additionally, three significant solutions to improving epilepsy care in Uganda were highlighted by participants: collaboration among treatment providers, community sensitization efforts to address stigma, and building medical infrastructure. Within building infrastructure, all participant types except traditional healers proposed the development of an epilepsy clinic designed to specifically treat epilepsy.

Conclusions: Based on these findings, there are four critical interventions that should be considered for improving epilepsy care in Uganda: collaboration between biomedical providers and traditional healers, community outreach programs for sensitization, the establishment of epilepsy clinics, and infrastructure building to address medication stockouts.