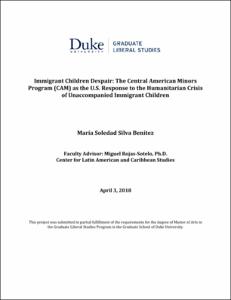 Files
thesis document
1.8 Mb
dukespace-license
378.5 Kb
Date
Author
Silva-Benitez, Maria Soledad
Advisor
Rojas-Sotelo, Miguel
Repository Usage Stats
408
views
1,086
downloads
Abstract
As the daughter of a migrant, I no doubt know what it means to leave my home country behind. In this experience underlies my passion for a topic that sadly for many is better to be avoided. The unprecedented surge of unaccompanied migrant minors at the U.S. border in 2014 finally put the spotlight on the brutal reality faced by children crossing the border. Consequently’ a humanitarian crisis was declared urging the governments of the Northern Triangle countries as well as the U.S. to take immediate action. This paper holds the result of a research project that aimed to analyse, evaluate and bring understanding to how the Obama Administration faced this crisis, its approach to the situation and the overall outcome through the execution of the Central American Minors Program (CAM). The primary sources that I use are nationwide data from the agencies involved during the CAM program, as well as press coverage, which serve to analyse the performance and impact of the program. In addition, published academic material and documentary films on the issue of unaccompanied minors and youth migration comprise secondary sources. Finally, the voices of local North Carolinian workers in governmental agencies, NGOs, churches, and schools, together with migration advocates and researchers were decisive to comprehend the reality of the situation. These invaluable interviews exposed the harsh measures taken to avert a crisis that morphed from being a human emergency to a national security issue that prompted the government to shut the borders to those in desperate need.
Type
Master's thesis
Department
Graduate Liberal Studies
Permalink
https://hdl.handle.net/10161/17158
Citation
Silva-Benitez, Maria Soledad (2018). Immigrant Children Despair: The Central American Minors Program (CAM) as the U.S. Response to the Humanitarian Crisis of Unaccompanied Immigrant Children. Master's thesis, Duke University. Retrieved from https://hdl.handle.net/10161/17158.
Collections
More Info
Show full item record