Microbe Farmers: How Fermentation Artisans are Bringing Peace to the War on Microbes 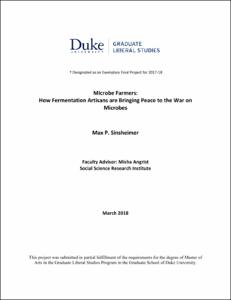 View / Download
4.8 Mb
Date
Author
Sinsheimer, Max
Advisor
Angrist, Misha
Repository Usage Stats
491
views
1,436
downloads
Abstract
In the nineteenth century the French scientist Louis Pasteur proved that the proliferation of certain microorganisms in a host body causes most diseases. His “germ theory” catalyzed twentieth century antimicrobial attitudes, which in the gastronomic realm meant reducing or eliminating microbial activity in food products. Fermentation artisans object that this ongoing “War on Microbes” devalues culturally important food traditions, and misses exciting discoveries that have transformed our understanding of the microverse. Microbes are no longer simply the enemy of food safety – they are the solution to better food. As one cheesemaker put it, “We say that we milk cows, but what we are really doing is farming the microbes.” This paper presents case studies of science-minded artisans helping Americans move beyond the Antimicrobial Age. Chapter One contextualizes the War on Microbes; whereas fermentation is arguably our oldest food technology, the relatively recent discovery of a microbiological basis for fermentation moved production practices away from the home or farm and into the factory. Chapter Two introduces artisans and their laboratory collaborators, and describes the genomic analytical tools they are using to sequence individual microorganism DNA and RNA (such as for brewing yeast), or to map an entire microbiome (such as for raw milk used in cheesemaking). Chapter Three focuses on wild craft beers, and suggests that lab-domesticated “wild” yeasts are an apt metaphor for the American environmental imagination. Chapter Four profiles a biotech company producing a specialty coffee to illustrate how fermentation is bleeding into biotechnology. Chapter Five visits a creamery in upstate Vermont, where the microbiology of the whole cheesemaking system is essential to an ecological conception of American terroir. The paper concludes with a meditation on the nature of disgust, and a final nudge in the direction of microbial delight.
Type
Master's thesis
Department
Graduate Liberal Studies
Subject
fermentation
microbiome
Louis Pasteur
War on microbes
wild yeast
microbe hunters
Permalink
https://hdl.handle.net/10161/17162
Citation
Sinsheimer, Max (2018). Microbe Farmers: How Fermentation Artisans are Bringing Peace to the War on Microbes. Master's thesis, Duke University. Retrieved from https://hdl.handle.net/10161/17162.
Collections
More Info
Show full item record