Differences between completely physically inactive and low active older men and their response to an exercise intervention: the Veterans LIFE study. 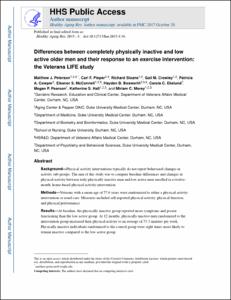 Professor in Population Health Sciences
Dr. Bosworth is a health services research and Associate Director of the Center for Health Services Research in Primary Care at the Durham VA Medical Center. He is also a Professor of Medicine, Psychiatry, and Nursing at Duke University Medical Center and Adjunct Professor in Health Policy and Administration at the School of Public Health at the University of North Carolina at Chapel Hill. His research interests comprise three overarching areas of research: 1) clinical research that provides Associate Professor in Medicine
My research is focused on developing evidence-based physical activity interventions for older adults with an eye to preserving functional independence and quality of life. I am particularly interested in developing exercise programs to promote physical and psychological well-being among older veterans with posttraumatic stress disorder (PTSD).

Professor in Medicine
The general focus of Dr. Morey's work is exercise and aging. All of her research examines how physical activity, exercise training, or physical fitness influence the physical functioning and/or pyschosocial quality of life of older adults. She directs a supervised hospital-based program for older adults, which is used to examine longitudinally the effects of exercise training on the musculoskeletal, articular, and cardiorespiratory systems. Furthermore, she has a number of studies that e Adjunct Associate Professor in the Department of Medicine Associate Professor of Biostatistics and Bioinformatics
Analytic Interests. 1) Issues in the Design of Medical Experiments: I explore the use of reliability/generalizability models in experimental design. In addition to incorporation of reliability, I study powering longitudinal trials with multiple outcomes and substantial missing data using Mixed models. 2) Issues in the Analysis of Repeated Measures Designs & Longitudinal Data: Use of Hierarchical Linear Models (HLM) or Mixed Models in modeling trajectories of multipl
More Authors
Alphabetical list of authors with Scholars@Duke profiles.