Neuronal correlates of serial decision-making in the supplementary eye field 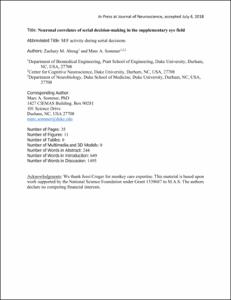 View / Download
1.3 Mb
Authors
Abzug, Zachary M
Sommer, Marc A
Repository Usage Stats
118
views
15
downloads
Abstract
Human behavior is influenced by serial decision-making: past decisions affect choices that set the context for selecting future options. A primate brain region that may be involved in linking decisions across time is the supplementary eye field (SEF), which, in addition to its well-known visual responses and saccade-related activity, also signals the rules that govern flexible decisions and the outcomes of those decisions. Our hypotheses were that SEF neurons encode events during serial decision-making and link the sequential decisions with sustained activity. We recorded from neurons in the SEF of two rhesus monkeys (Macaca mulatta, one male, one female) that performed a serial decision-making task. The monkeys used saccades to select a rule that had to be applied later in the same trial to discriminate between visual stimuli. We found, first, that SEF neurons encoded the spatial parameters of saccades during rule selection but not during visual discrimination, suggesting a malleability to their movement-related tuning. Second, SEF activity linked the sequential decisions of rule selection and visual discrimination, but not continuously. Instead, rule-encoding activity appeared in a “just-in-time” manner before the visual discrimination. Third, SEF neurons encoded trial outcomes both prospectively, before decisions within a trial, and retrospectively, across multiple trials. The results thus identify neuronal correlates of rule selection and application in the SEF, including transient signals that link these sequential decisions. Its activity patterns suggest that the SEF participates in serial decision-making in a contextually-dependent manner as part of a broader network.
Type
Journal article
Permalink
https://hdl.handle.net/10161/17213
Collections
More Info
Show full item record