Dietary Patterns among Asian Indians Living in the United States Have Distinct Metabolomic Profiles That Are Associated with Cardiometabolic Risk. 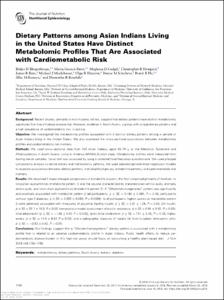 W. David and Sarah W. Stedman Distinguished Professor of Nutrition in the School of Medicine
Over its 16 year history, our laboratory has investigated mechanisms of metabolic regulation and fuel homeostasis in mammalian systems. Major projects include: 1) Mechanisms involved in regulation of insulin secretion from pancreatic islet &#946;-cells by glucose and other metabolic fuels; 2) Development of methods for protection of &#946;-cells against immune-mediated damage; 3) Studies on spatial organization and regulation of systems controlling hepatic glucose balance; 4) Studies
Alphabetical list of authors with Scholars@Duke profiles.