Neural Correlates of Attention and Motivational Value in Parietal Cortex 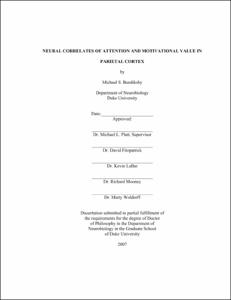 View / Download
1.1 Mb
Date
Author
Bendiksby, Michael S.
Advisors
Platt, Michael L
Fitzpatrick, David
LaBar, Kevin
Mooney, Richard
Woldorff, Marty
Repository Usage Stats
819
views
821
downloads
Abstract
Area LIP has long been considered to be heavily involved in controlling transformations of visual stimuli into oculomotor behavior, as well as being an integral part of the extensive cortico-cortical network that controls covert visual attention. Neurons in LIP have been shown to respond to shifts in spatial attention as well as changes in the reward contingencies associated with visual stimuli, leading to the hypothesis that this area is involved in the selective processing of behaviorally relevant visual stimuli. However, the effects of attentional and motivational processes on neuronal activity in LIP have not been fully dissociated from each other. In one experiment I found that changing the reward contingencies in a peripheral visual detection task sytematically modulated visual responses in LIP, and that these changes in activity were correlated with the reaction time costs of re-orienting attention. In a further experiment, I manipulated the motivational state of rhesus macaque monkeys by varying the reward value associated with successful completion of a cued reflexive saccade task, and was thus able to study the neuronal activity in LIP while attention and motivation were independently controlled and manipulated. LIP responses to visual targets showed that directed visual attention systematically increased activity in neurons coding the attended location, suggesting spatially specific selective processing of that part of the visual field. In contrast, increasing motivation multiplicatively enhanced the response to visual targets irrespective of their location, suggesting a spatially non-specific enhancement of processing. The effects of attention and motivation on LIP activity were both predictive of changes in saccadic reaction times. These results suggest that attention and motivation exert distinct influences on visual representations in LIP, but that they both contribute to the preferential processing of behaviorally relevant visual stimuli. The data thus support the hypothesis that area LIP encodes a salience map of the visual world.
Type
Dissertation
Department
Neurobiology
Subject
Attention
Motivation
LIP
Rhesus
Reward
Neurophysiology
Permalink
https://hdl.handle.net/10161/173
Citation
Bendiksby, Michael S. (2007). Neural Correlates of Attention and Motivational Value in Parietal Cortex. Dissertation, Duke University. Retrieved from https://hdl.handle.net/10161/173.
Collections
More Info
Show full item record