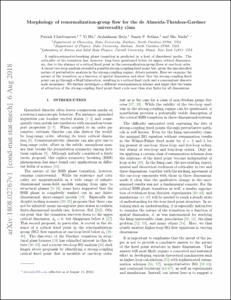 View / Download
1.0 Mb
Authors
Charbonneau, Patrick
Hu, Yi
Raju, Archishman
Sethna, James P
Yaida, Sho
Repository Usage Stats
106
views
21
downloads
Abstract
A replica-symmetry-breaking phase transition is predicted in a host of disordered media. The criticality of the transition has, however, long been questioned below its upper critical dimension, six, due to the absence of a critical fixed point in the renormalization-group flows at one-loop order. A recent two-loop analysis revealed a possible strong-coupling fixed point but, given the uncontrolled nature of perturbative analysis in the strong-coupling regime, debate persists. Here we examine the nature of the transition as a function of spatial dimension and show that the strong-coupling fixed point can go through a Hopf bifurcation, resulting in a critical limit cycle and a concomitant discrete scale invariance. We further investigate a different renormalization scheme and argue that the basin of attraction of the strong-coupling fixed point/limit cycle may thus stay finite for all dimensions.
Type
Journal article
Subject
cond-mat.stat-mech
cond-mat.stat-mech
cond-mat.dis-nn
Permalink
https://hdl.handle.net/10161/17391
Collections
More Info
Show full item record