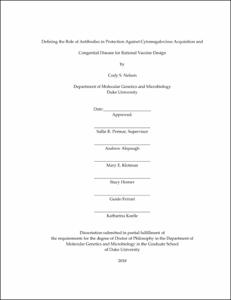 Human cytomegalovirus (HCMV) is the most common cause of congenital infection worldwide, impacting 1 in 150 live-born infants. Children afflicted by congenital HCMV frequently suffer from lifelong, debilitating neurologic sequelae including microcephaly, sensorineural hearing loss, and cognitive impairment. Natural maternal immunity to HCMV reduces the frequency of congenital infection, but does not prevent the disease altogether. Thus, a vaccine to reduce the incidence and severity of infant infection is a public health priority. Employing a nonhuman primate model of congenital CMV transmission as well as clinical samples from a partially-efficacious HCMV vaccine trial, we sought to examine both the attributes of anti-HCMV immune responses that provide protective immunity as well as the impact of vaccine-elicited immunity on the in vivo HCMV viral population.

First, we used a nonhuman primate model of congenital CMV infection to investigate the ability of preexisting antibodies to protect against placental CMV transmission in the setting of primary maternal infection and subsequent viremia, which is required for placental virus exposure. Pregnant, CD4+ T cell-depleted, rhesus CMV (RhCMV)-seronegative rhesus monkeys were treated with either standardly-produced hyperimmune globulin (HIG) from RhCMV-seropositive macaques or dose-optimized, potently RhCMV-neutralizing HIG prior to intravenous challenge with an RhCMV swarm. HIG passive infusion provided complete protection against fetal loss in both groups. The dose-optimized, RhCMV-neutralizing HIG additionally inhibited placental transmission of RhCMV and reduced viral replication and diversity. Our findings suggest that the presence of durable and potently-neutralizing antibodies at the time of primary infection can prevent transmission of systemically-replicating maternal RhCMV to the developing fetus.

Lastly, we evaluated the impact of gB/MF59-elicited immune responses on the population of viruses acquired by trial participants. In this analysis, we employed quantitative PCR as well as two distinct next-generation sequencing strategies (short amplicon and whole gene) to interrogate genetic differences between the HCMV populations infecting gB/MF59 vaccinees and placebo recipients. For the majority of subject-specific viral populations analyzed, we identified 1 or 2 dominant viral variants, as well as a large number of minor variants present at very low frequency. This finding suggests that the intrahost viral population constitutes a heterogeneous swarm of genetically-distinct virus quasi-species. Additionally, we identified several distinctions between the viral populations of acutely-infected vaccinees and placebo recipients. First, there was reduced magnitude viral shedding in the saliva of gB vaccinees compared to placebo. Furthermore, we noted evidence of genetic compartmentalization at the gB locus in 3 of 4 vaccinees, though only in 1 of 7 placebo recipients. Finally, we observed an enrichment of gB1 genotype HCMV variants among placebo recipients compared to vaccinees, and hypothesize that the gB1 genotype vaccine immunogen might have elicited genotype-specific protection that accounts for the efficacy observed in clinical trial.

Thus, we have made several observations that will inform rational design of the next generation of HCMV vaccines. First, our data suggests that preexisting antibodies can protect against congenital CMV transmission in a rhesus monkey model, and thus that antibodies could be a primary target of vaccines to eliminate congenital HCMV infection. Secondly, our analysis of antibody responses elicited by gB/MF59 vaccination indicates that non-neutralizing antibody functions contributed to the observed 50% vaccine protection and therefore should be a consideration in future vaccine design. Finally, our examination of viral populations in gB/MF59 vaccinees indicates that gB-elicited antibodies had a measurable impact on viral intrahost population dynamics and that gB immunogen strain-specific responses may have defined vaccine protection, suggesting that immunogen strain breadth may be an important factor to consider for future vaccine design.