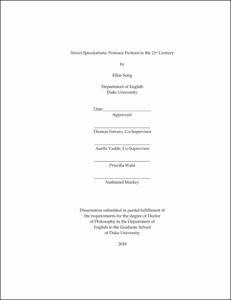 This project charts the emergence of a postrace aesthetic in American fiction. It examines how American novels respond to the pressures of what has been called the paradox of the postrace era: that our images and rhetoric portray a nation moving toward racial equality while our statistics actually reveal the opposite. I argue that through the use of features such as futuristic orientation, racially unmarked characters, and the reconfiguration of racial groupings, postrace novels attempt to unsettle our notions of race – a paradoxical endeavor, for attempts to unsettle a category ultimately invoke it again. Capable of interrogating emergent cultural phenomena, postrace novels provide a crucial vantage point from which we can interpret the shifting operations of race in the 21st century.