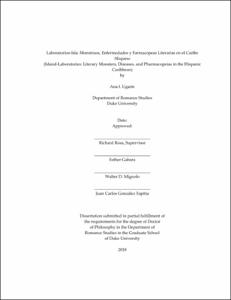 This dissertation examines how fiction from the 1950s to the present exposes the historical functioning of Caribbean territories as laboratories for political, economic, and scientific experimentation. Through close-readings of Puerto Rican and Cuban literary texts, I argue that the laboratory, as a biopolitical system of power legitimation, operates on the levels of knowledge, affect, and subjectivities. First, the authors I study denounce how medical and literary discourse intersect to create eugenic, homophobic, and patriarchal diagnoses, proposing instead counter-hegemonic forms of imagining (and experiencing) mental and physical health, corporeal difference, and healing processes. Second, the diverse works of fiction I examine revolve around the shared affect of fear, which is heightened through the anticipation of further testing. Ultimately, I show how the laboratory produces paradoxical forms of alterity for the test subjects—a method of trial and error relies on an othered subject who, at the same time, must be sufficiently similar to the experimenter in order to function as a reliable testing object. This investigation contributes to and opens up new interpretative frameworks for the fields of Caribbean and postcolonial studies by examining an understudied form of subalternity—i.e., the test subject—through a connection between literary genres, geographies, and historical periods, which are often explored in isolation. Chapters 2 and 3 identify several forms of monstrosity and illness in the narrative fictions of Virgilio Piñera and José Lezama Lima. I show how these authors foreground the monstrous body in order to problematize the cycles of political experimentation in Cuba, as well as the medical nature of the US occupation and interventionism in the first decades of the 20th century. Chapter 4 explores the narrative work of Puerto Rican-Dominican author Pedro Cabiya, proposing the category of “hypochondriac fiction,” which names an aesthetic space for the destabilization of biopolitics in the context of repeated medical experimentation on human beings in Puerto Rico. Chapter 5 looks into the work of Rafael Acevedo, José (Pepe) Liboy, and Jorge Enrique Lage. I address the role of paranoia in Cuban and Puerto Rican novels by revealing the counterintuitive transformation of science fiction—in many senses, the epitome of fantastic fabrications—into the ultimate guarantor of credibility. In the epilogue I explore the representation of healing processes in Mayra Santos Febres’ La amante de Gardel (2015).