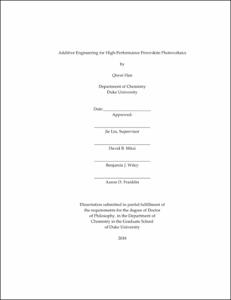 Perovskite photovoltaics has attracted tremendous attention recently due to the advance in the device performance. However, it is still challenging to effectively commercialize the perovskite technology due to several issues including current-voltage hysteresis, stability, complicated device architectures, etc. In this dissertation, we use the additive to tailor the properties of the functional layers in perovskite photovoltaic devices, aiming to engineer the interface, film morphology, carrier dynamics and film crystallization process. By using the additive engineering approaches, our goal is to achieve high-performance perovskite photovoltaics with reduced hysteresis, improved stability, versatile processing methods and simplified device architectures.

Based on the understanding from chapter 3, a room-temperature process was developed to deposit high-quality perovskite films by using PbI2 and methylammonium thiocyanate (MASCN) as additives in chapter 4. Due to the synergistic effects of the additives, room-temperature-processed perovskite films with micron-size grains and microsecond-range carrier lifetime were successfully obtained for high-performance devices. More importantly, we established the correlation between the crystal grain size in resultant perovskite films and the precursor aggregate size in precursor solutions. The correlation suggested that the perovskite grain sizes from solution process depended on the precursor aggregate sizes.