Identification of Molecular Determinants of Cellular Senescence in Cancer and Aging 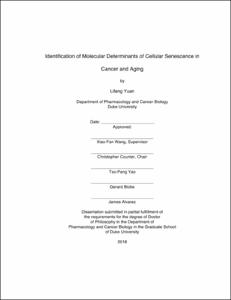 Cellular senescence is a fundamental cell fate playing significant and complex roles during tumorigenesis and natural aging process. However, the molecular determinants distinguishing senescence from other temporary and permanent cell-cycle arrest states such as quiescence and post-mitotic state and the specified mechanisms underlying cell-fate decisions towards senescence versus cell death in response to cellular stress stimuli remain less understood. In our studies, we aimed to employ multi-omics approaches to deepen our understanding of cellular senescence, in particular, regarding the specific molecular determinants distinguishing cellular senescence from other non-dividing cell fates.

Notably, one of the most prominent features of cellular senescence differing from other non-dividing cell fates is the increased expression of senescence-associated beta-galactosidase. Because 5-Dodecanoylaminofluorescein Di-β-D-Galactopyranoside (C12FDG) is known as the substrate catalyzed by beta-galactosidase for producing a green fluorescent product, we applied this compound to the cells undergoing G1 cell-cycle arrest (a mixture of senescent and quiescent cells). Employing fluorescence-activated cell sorting, we separated and collected senescent and quiescent cell populations based on green fluorescence intensity. As cellular senescence is more than just the non-dividing cell fate, we therefore systematically compared the gene expression between senescence and quiescence to provide insights into the specific features underlying senescence programming beyond cell cycle arrest. Following this strategy for the comparative gene expression analysis, we identified and characterized several genes critically involved in the program of cellular senescence, and one of the major findings was to identify IMMP2L, a nuclear-encoded mitochondrial intermembrane peptidase, can act as a molecular switch for determining the cell fates of healthy living, cell death, and senescence.

Inhibiting IMMP2L signaling through either the suicidal protease inhibitor SERPINB4 or transcriptional downregulation was sufficient to initiate cellular senescence by reprogramming the mitochondria functionality. Employing proteomics, we identified at least two mitochondrial target proteins processed by IMMP2L, including metabolic enzyme GPD2 and cell death regulator/electron transport chain complex I component AIF. Functional study suggests that, in healthy cells, the IMMP2L-GPD2 axis catalyzes redox reactions to produce phospholipid precursor Glycerol 3-phosphate; while under oxidative stress, IMMP2L cleaves AIF into its truncated pro-apoptotic form leading to cell death initiation to remove cells with irreparable damage. For cells programmed to senesce, the IMMP2L-GPD2 axis is switched off to block phospholipid biosynthesis leading to reduced availability of membrane building blocks for cell growth together with the disruption of mitochondrial localization of certain phospholipid-binding kinases, such as protein kinase C-δ (PKC-δ) and its downstream signaling. These alterations in mitochondria-associated metabolism and signaling network promote entry into a senescent state featuring high levels of reactive oxygen species (ROS). Simultaneously, blockage of pro-apoptotic AIF generation, which is due to the loss of IMMP2L, ensures the viability of senescent cells under ROS-mediated oxidative stress. Taken together, we have mechanistically uncovered IMMP2L-mediated signaling as a key regulatory pathway in the control of fates of healthy, apoptotic, and senescent cells.

In the physiological conditions, we observed that IMMP2L is downregulated in the muscle tissues and the blood samples of geriatric groups compared to that from young cohorts. Besides, centenarians display better genomic integrity at the IMMP2L locus when compared with the general population. Taken together, it suggests IMMP2L could also be an important player associated with the natural aging process.