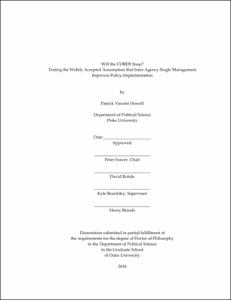 Since the end of the Cold War, the US Government’s difficulties in implementing policies requiring integrated responses from multiple agencies have led to a number of calls to reform USG inter-agency policy-implementation; similar to how the 1986 Goldwater-Nichols Act improved the “jointness” of the various military services. All of these major studies and reports, most prominent being the 2008 “Project on National Security Reform”, similarly recommended adopting a Unity of Command approach that authorizes a single manager to synchronize the operations of all departments and agencies in time, space, and purpose. All of these studies directly or indirectly base their recommendations off a single case study from the Vietnam War that implemented the policy of pacification (counter-insurgency)- CORDS (Civil Operations Revolutionary Development Support). However, the causal relationship between single management and effective pacification has never been established as a fact; it is a rather a widely-held, but untested, assumption. This project will supplement archival research from the US and Communist perspectives with current qualitative and quantitative research on counter-insurgency (COIN) and CORDS in Vietnam to test the assumption that single management made CORDS effective. By generating a detailed list of alternative explanations for improved pacification in Vietnam in addition to CORDS, it will use three different political science methods (comparative, congruence, and process-tracing) to eliminate the infeasible hypotheses and rank order the remaining feasible hypotheses. The triangulation of this research question shows that, while the causal connection between single management and effective pacification in Vietnam is not an absolute fact, it is an extremely strong and likely assumption.