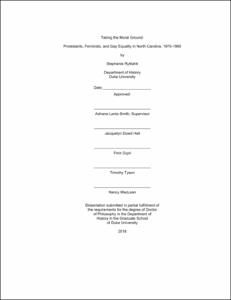 “Taking the Moral Ground” examines the relationship between Protestantism and the movements for feminist and gay equality in North Carolina during the 1970s and 1980s to answer two central questions: How did a group of white heterosexual clergy, moderate mainliners, and African American ministers in central North Carolina become the spokespersons for feminist and gay liberation in the 1970s and 1980s? What did the theoretical frameworks of organized religion offer that made these types of unlikely alliances possible? To answer these questions “Taking the Moral Ground” begins with an exploration of the religious values that framed the upbringing, activist career, and ministry of Pauli Murray, a native of North Carolina and the first African American woman ordained by the Episcopal Church. Emphasizing the importance of the black freedom struggle and a universal understanding of human rights to her ministry, this dissertation moves on to explore how the key tenets Murray championed—universal love and justice—played out as religious feminists fought for women’s equality within a platform of intersectional social justice across North Carolina in the 1970s. Against the backdrop of a burgeoning movement for women’s liberation and the rise of the New Right, women across the state melded the philosophies of the social gospel with feminist practices like consciousness raising. They fought for stronger female representation at Duke Divinity School, more professional opportunities for women clergy, and the passage of the Equal Rights Amendment. In the 1980s, gay Christians and moderate clergy picked up where feminists left off as they formed alliances with anti-racist groups and agitated for the acceptance of the LGBTQ community in local churches while simultaneously drawing on Christian values to support citizenship rights for gays and lesbians across the state. While organized religion provided plenty of obstacles to transplanting this vision of the religiously-driven inclusivity onto campaigns for women’s rights and gay liberation, it also offered institutional frameworks, rituals of belonging, and a certain theological flexibility that most strictly secular movements lacked. In this way, many of the religious coalitions forged during the 1970s and 1980s in North Carolina exceeded the effectiveness and organizational breadth of other strictly secular groups across the state and nation.