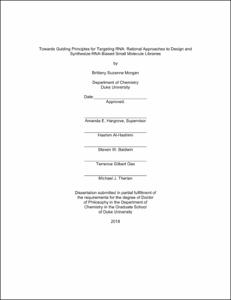 RNA is increasingly recognized as a therapeutic target in many diseases, including viral and bacterial infections, neurodegenerative disease, and cancer. Despite this, no FDA-approved drugs target RNA, aside from select antimicrobials that recognize highly abundant ribosomal RNA. Currently, most RNA-targeted, small molecule screens utilize commercially available libraries; however, these libraries are presumably biased to protein-binding chemotypes, leading to low hit rates for RNA and/or the identification of promiscuous ligands with limited efficacy in biological systems. Additionally, previous attempts to characterize distinct guiding principles for targeting RNA were unsuccessful, potentially due to the choice of criteria (e.g. in vitro binding) or the limited selection of parameters (e.g. Lipinski’s rules). As a result, few rationally designed, RNA-focused libraries have been developed and screened against non-ribosomal RNAs, hindering the identification of chemical probes and the study of disease-causing RNAs. Therefore, the goal of my dissertation work is to elucidate guiding principles for selectively targeting RNA and utilize the rules to rationally design and synthesize novel RNA-biased libraries.

Toward this goal, 2-oxazolidinone was chosen as the core for small molecule synthesis, as the scaffold is present in FDA-approved antimicrobials that target ribosomal RNA as well as small molecules that inhibit the T-box riboswitch in vitro. In addition to being diversity-oriented, the developed synthetic scheme utilized commercially available, chiral amino acid derivatives, which allowed for stereochemical control and therefore, the study of stereocenters in RNA binding and selectivity. Five scaffolds and fifteen bis-substituted small molecules were synthesized, and a preliminary screen identified a secondary structure binding preference for RNA bulge motifs. In parallel, the RNA-targeted BIoactive ligaNd Database (R-BIND) was curated, which was comprised of RNA-binding ligands with activity in cell culture and animal models. The library was compared to in vitro RNA binders and FDA-approved drugs from which several guiding principles were identified for bioactive RNA-binding ligands: i) compliance to common medicinal chemistry rules; ii) a statistically significant shift in rod-like character; and iii) a statistically significant increase in nitrogen atom count and ligand rigidity. These rules were utilized to develop a biology-oriented synthesis based on the 2-oxazolidinone core and bioactive RNA chemical space. The strategy included a novel scaffold design, a subunit library inspired by the building blocks in R-BIND, and a method to select small molecules for synthesis based on similarity to known RNA bioactives. Future work will include the diversification and expansion of the 2-oxazolidinone-based libraries, screening of the small molecules against secondary structure libraries as well as therapeutically relevant RNAs, and validation and exploration of bioactive RNA-privileged chemical space. It is expected that the design strategies and guiding principles identified in this and future work will establish an avenue to create and/or select additional RNA-focused libraries, facilitating the discovery of novel RNA-targeted chemical probes and therapeutics.