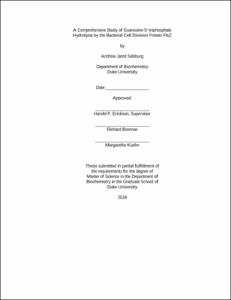 The bacterial protein FtsZ plays a vital role in cytokinesis in prokaryotes as it polymerizes to form an FtsZ ring (Z ring) at the division septum midcell. FtsZ exhibits a GTP hydrolysis activity and attempts have been made to model the kinetics of this process. There is a major discrepancy, however, over the concentration of GTP needed for activity. The dissociation constant (KD) between wild-type FtsZ protein and GTP was measured to be 30 nM using isothermal titration calorimetry. In contrast, several research groups have reported that GTP hydrolysis required GTP concentrations in the millimolar range. They used Michaelis-Menten kinetics to model the GTP concentration dependence and obtained an apparent binding constant (Km) in the range of 300-1,000 µM GTP. Km and KD are not identical measures of binding given that they differ by the kinetic constant governing catalysis, kcat, but we suggest that a five order of magnitude difference between the values is unprecedented and this was a problem that needed investigating.

My overall goal in this work has been to perform a comprehensive in vitro study of the FtsZ GTP hydrolysis activity using an enzyme-coupled regenerating system. With this system rates of GTP hydrolysis by FtsZ are obtained spectrophotometrically. I have confirmed for wild-type FtsZ that GTP hydrolysis rates show little to no dependence on GTP concentrations in the range of 50-3,000 µM, contradicting the high values of Km reported in some previous studies. Since we have failed to reproduce the high Km with three different preparations of FtsZ protein, we cannot propose a definitive mechanism for the previous results.

I also measured the GTP hydrolysis of several mutants of FtsZ: E238A, L169R, and FtsZ84 (G105S). I investigated each of these mutants to see if they had a high apparent Km. FtsZ84 had a low overall hydrolysis rate, but did show a large increase in hydrolysis rates when GTP was increased from 50-3,000 µM. We hypothesize that a lower affinity for GTP is not a Michaelis-Menten Km, but likely a reflection of a weak binding of GTP by FtsZ84, giving KD in the millimolar range.