The Design, Synthesis and Characterization of Lanthanide-based Nanomaterials and Their Use in 3D Biological Imaging and Radiation Dosimetry 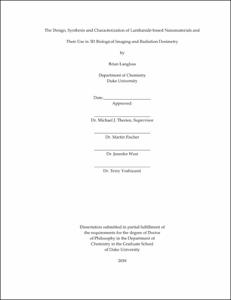 Lanthanide-doped materials have been studied for decades for their unique photophysical properties derived from their f-block orbitals. More recently, the prominence of techniques allowing for the study and characterization of nanoscale materials has led to a renewed interest in these materials on the nanoscale. This work has led to a wealth of studies on the synthesis and characterization of a number of lanthanide doped nanomaterials as well as numerous proposals and preliminary demonstrations of their applications. This dissertation focuses on three key aspects of this field: (1) a synthetic means to controlling the relative intensities of the emissive bands in upconversion nanoparticles (UCNPs) (2) the development of a 3D imaging modalities that leverage the unique photophysical properties of upconverting nanomaterials and (3) the application of scintillating nanoscale radiation detection materials as an alternative to the single-crystal bulk lanthanide doped materials and plastic scintillators currently employed.

In many proposed applications of upconverting nanomaterials, the relative intensities of emission bands are a key component. For instance, security inks rely on measuring the ratio of the green and red emission peaks to distinguish between authentic and counterfeit materials. While multiple upconversion compositions have been identified with varying relative emission intensities, there has been little study into effective means of synthetically manipulating the intensities of these emission bands within a single composition. Research presented here focuses on understanding the fundamental influences on the coprecipitation reaction method and ultimately manipulating the synthetic techniques to achieve meaningful changes in the emission properties without changing the overall composition of the nanoparticle. An injection reaction method is developed that allows for manipulating the interionic distance between sensitizer and activator pairs resulting in a significant decrease in the red emission. It is further shown that this change in interionic distance is a likely overlooked contributing factor in the emission properties of other compositions that have been studied. This work represents the first steps towards designing application specific emission properties via synthetic control rather than developing applications specific nanomaterial compositions.

Owing to their NIR excitation, lack of tissue autofluorescence, and photostability UCNPs are a promising target for bio-imaging applications. Past studies have demonstrated the potential for UCNPs for cellular, tissue and whole body imaging. However, an imaging system that fully incorporates these materials and leverages their properties to improve upon existing imaging capabilities has yet to be shown. An optical emission computed tomography imaging (OECT) system is modified to enable NIR excitation and imaging of the upconversion signal. Using this system, the first 3D modeled upconversion imaging is demonstrated. By coupling the transmission and upconversion signals in this imaging modality, precise structural imaging is possible and background free images of both the bronchial pathways in the lungs as well as white pulp structures in the spleen are shown using upconversion enhanced OECT.

In addition to upconversion processes, the f-block orbitals can also be utilized in scintillation processed to convert ionizing radiation into visible light. Typically, lanthanide based single crystals are used in the bulk for developing large radiation detectors. However, recent advances in the Therien lab have seen the development of nanoscale [Y2O3] nanomaterials and their incorporation into a fiber optic detector (nanoFOD). This detector is shown here to function as a quality assurance tool in monitoring brachytherapy radiation treatments. Further, using the 3D printing method of fused deposition modeling, this scintillating nanomaterial is incorporated into a first of its kind low-cost radiation-imaging screen. In both applications, the nanomaterial is demonstrated to be highly effective at detecting and monitoring radiation. The low cost, and ease of manufacture for these devices as well as their instantaneous detection of radiation dose rates are a significant improvement over the current detector technologies employed.