The Weight of Hope: Independent Music Production Under Authoritarianism in Egypt 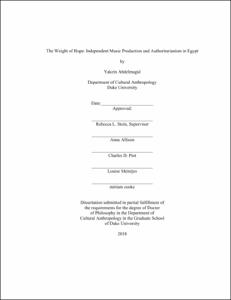 This dissertation is an ethnographic study of the independent music scene in Cairo, in which music producers and cultural entrepreneurs who came of age during the 2011 revolution and 2013 counterrevolution hope to constitute alternative music cultures and markets in the neoliberal digital age under an authoritarian regime.

This research is based on thirty-three months of fieldwork in Cairo among the musicians, studio and venue managers, cultural entrepreneurs, and fans of the independent music scene, between 2011 and 2018. The analysis pays close attention to the forms of labor, entrepreneurial practices, and aesthetic forms by which social actors anticipate their futures. As such, the study is organized along three affective registers— ambivalence, aspirations, and fantasies—which capture the journeys of the social actors who strive to endure and practice hope in spite of the despair propagated by authoritarianism. By bridging between affect theory and Arendtian political theory, I explain how the spreading of affective forces of hope constitutes alternative publics beyond the control of the state, revealing some of the factors that contribute to the crisis and persistence of authoritarianism in Egypt.