Essays on Delegation and Mechanisms 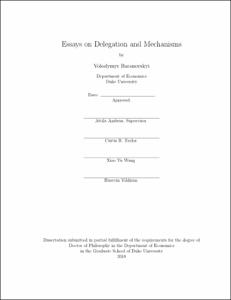 This dissertation consists of three theoretical essays on delegation and mechanism design.

Chapter 2 is co-authored with Attila Ambrus and Aaron Kolb. We investigate competition in a delegation framework. An uninformed

principal is unable to perform a task herself and must solicit proposals from two biased and imperfectly informed experts.

In the focal equilibrium, the principal seeks to offset the bias of the experts, but when the experts are motivated more by ideology

than career concerns, they increase the bias of their proposals in anticipation. Despite this ideological winner's curse, we show that having a second expert can benefit the principal, even if the two experts have the same biases or if the first expert is known to be unbiased. In contrast with other models of expertise, in our setting the principal prefers experts with equal rather than opposite biases.

The principal may also benefit from commitment to an ``element of surprise," making an ex post suboptimal choice with positive probability.

Chapter 3 is co-authored with Sergii Golovko. We study an auction environment in which after the sale, the seller has the opportunity to verify the winner's ex-post value and impose a limited punishment for "underbidding." Investigating how the seller should approach this opportunity, we show that even small penalties allow the seller to significantly increase her revenue. In our environment, the first-price auction with an optimally chosen penalty rule is optimal among all winner-pay auctions. Before the auction begins, the seller recommends a bidding strategy to the bidders. If the auction winner bids at least as much as the seller has suggested, the winner is not punished; if, on the other hand, the winner does not bid as much as has been recommended, he is punished, with the penalty increasing as the buyer deviates more and more from the recommendation. Our results indicate several qualitative differences from standard (without ex-post punishments) auctions. In equilibrium, buyers bid more aggressively; the optimal reserve price is lower; and the revenue-equivalence principle does not hold---we state conditions under which a first-price auction is superior to a second-price auction. Our results also lead us to suggest the following recommendation for policymakers: A government may increase its revenue when auctioning publicly owned assets by providing tax concessions to buyers who submit sufficiently high bids.

Chapter 4 is co-authored with Attila Ambrus. As in Chapter 2, principal is trying to solicit information from multiple, incompletely informed experts. However, here we allow for action choice (policy) and monetary transfers to be conditional on reports. Additionally, we investigate an environment in which monetary transfers may be conditioned on realized state (ex post state verification). In this context we can also allow for only one expert. With multiple experts, we investigate the case with no ex post state verification - monetary transfers are conditional on reports only. Under certain assumptions we show that expert can solicit all information from experts, extracting all surplus.