Household Charitable Giving at the Intersection of Gender, Marital Status, and Religion 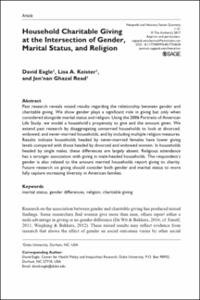 Assistant Research Professor of Global Health
I am an Assistant Research Professor the Center for Health Policy and Inequalities Research and the Duke Global Health Institute. I am an expert on the health of religious clergy, the changing shape of churches in North American society, and the implications of these trends for the professional training of ministers.More recently, my research ha Professor of Sociology
I do research in the areas of economic sociology, organizations and management, and social networks. I study organization and household behavior in both the U.S. and China, including work on organization strategy and the role that relations among organizations play in shaping strategy, household financial decision making, and business start-up. My work on business networks in China looks at relations among firms and how these shape firm performance, survival, and structure. I also do work on