Gordon Tullock as a political scientist 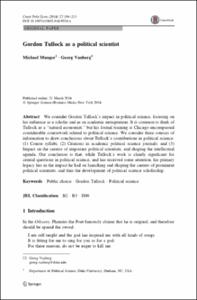 View / Download
295.3 Kb
Date
Authors
Munger, M
Vanberg, G
Repository Usage Stats
84
views
54
downloads
Abstract
© 2016, Springer Science+Business Media New York. We consider Gordon Tullock’s impact in political science, focusing on his influence as a scholar and as an academic entrepreneur. It is common to think of Tullock as a “natural economist,” but his formal training at Chicago encompassed considerable coursework related to political science. We consider three sources of information to draw conclusions about Tullock’s contributions in political science: (1) Course syllabi; (2) Citations in academic political science journals; and (3) Impact on the careers of important political scientists, and shaping the intellectual agenda. Our conclusion is that, while Tullock’s work is clearly significant for central questions in political science, and has received some attention, his primary legacy lies in the impact he had on launching and shaping the careers of prominent political scientists, and thus the development of political science scholarship.
Type
Journal article
Permalink
https://hdl.handle.net/10161/17828
Published Version (Please cite this version)
10.1007/s10602-016-9214-x
Publication Info
Munger, M; & Vanberg, G (2016). Gordon Tullock as a political scientist. Constitutional Political Economy, 27(2). pp. 194-213. 10.1007/s10602-016-9214-x. Retrieved from https://hdl.handle.net/10161/17828.
This is constructed from limited available data and may be imprecise. To cite this article, please review & use the official citation provided by the journal.
Collections
More Info
Show full item record Professor of Political Science
Professor of Political Science, and Director of the PPE Certificate Program. His primary research focus is on the functioning of markets, regulation, and government institutions. He has taught at Dartmouth College, University of Texas, and University of North Carolina (where he was Director of the Master of Public Administration Program), as well as working as a staff economist at the Federal Trade Commission during the Reagan Administration. He is a past President of the Public Choice Society,