Auditory signals evolve from hybrid- to eye-centered coordinates in the primate superior colliculus. 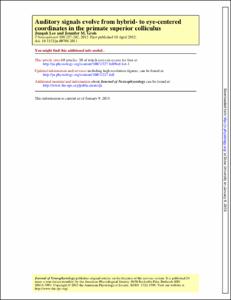 View / Download
2.2 Mb
Date
Authors
Lee, Jungah
Groh, Jennifer M
Repository Usage Stats
92
views
15
downloads
Abstract
Visual and auditory spatial signals initially arise in different reference frames. It has been postulated that auditory signals are translated from a head-centered to an eye-centered frame of reference compatible with the visual spatial maps, but, to date, only various forms of hybrid reference frames for sound have been identified. Here, we show that the auditory representation of space in the superior colliculus involves a hybrid reference frame immediately after the sound onset but evolves to become predominantly eye centered, and more similar to the visual representation, by the time of a saccade to that sound. Specifically, during the first 500 ms after the sound onset, auditory response patterns (N = 103) were usually neither head nor eye centered: 64% of neurons showed such a hybrid pattern, whereas 29% were more eye centered and 8% were more head centered. This differed from the pattern observed for visual targets (N = 156): 86% were eye centered, <1% were head centered, and only 13% exhibited a hybrid of both reference frames. For auditory-evoked activity observed within 20 ms of the saccade (N = 154), the proportion of eye-centered response patterns increased to 69%, whereas the hybrid and head-centered response patterns dropped to 30% and <1%, respectively. This pattern approached, although did not quite reach, that observed for saccade-related activity for visual targets: 89% were eye centered, 11% were hybrid, and <1% were head centered (N = 162). The plainly eye-centered visual response patterns and predominantly eye-centered auditory motor response patterns lie in marked contrast to our previous study of the intraparietal cortex, where both visual and auditory sensory and motor-related activity used a predominantly hybrid reference frame (Mullette-Gillman et al. 2005, 2009). Our present findings indicate that auditory signals are ultimately translated into a reference frame roughly similar to that used for vision, but suggest that such signals might emerge only in motor areas responsible for directing gaze to visual and auditory stimuli.
Type
Journal article
Subject
Neurons
Animals
Macaca mulatta
Acoustic Stimulation
Analysis of Variance
Photic Stimulation
Sound Localization
Space Perception
Psychomotor Performance
Action Potentials
Head Movements
Saccades
Time Factors
Female
Male
Statistics as Topic
Superior Colliculi
Permalink
https://hdl.handle.net/10161/17893
Published Version (Please cite this version)
10.1152/jn.00706.2011
Publication Info
Lee, Jungah; & Groh, Jennifer M (2012). Auditory signals evolve from hybrid- to eye-centered coordinates in the primate superior colliculus. Journal of neurophysiology, 108(1). pp. 227-242. 10.1152/jn.00706.2011. Retrieved from https://hdl.handle.net/10161/17893.
This is constructed from limited available data and may be imprecise. To cite this article, please review & use the official citation provided by the journal.
Collections
More Info
Show full item record