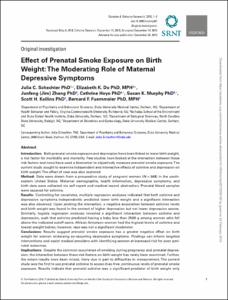 View / Download
279.6 Kb
Date
Authors
Schechter, Julia
Do, Elizabeth K
Zhang, Junfeng Jim
Hoyo, Cathrine
Murphy, Susan K
Kollins, Scott H
Fuemmeler, Bernard
Repository Usage Stats
50
views
29
downloads
Abstract
Introduction:Both prenatal smoke exposure and depression have been linked to lower birth weight, a risk factor for morbidity and mortality. Few studies have looked at the interaction between these risk factors and none have used a biomarker to objectively measure prenatal smoke exposure. The current study sought to examine independent and interactive effects of cotinine and depression on birth weight. The effect of race was also explored. Method:Data were drawn from a prospective study of pregnant women (N=568) in the southeastern U.S. Maternal demographic, health information, depressive symptoms, and birth data were collected via self-report and medical record abstraction. Prenatal blood samples were assayed for cotinine. Results:Controlling for covariates, multiple regression analyses indicated that both cotinine and depressive symptoms independently predicted lower birth weight and a significant interaction was also observed. Upon probing the interaction, a negative association between cotinine levels and birth weight was found in the context of higher depression but not lower depression scores. Similarly, logistic regression analyses revealed a significant interaction between cotinine and depression, such that cotinine predicted having a baby < 2500 g among women who fell above the indicated cut-off score. African American women had the highest levels of cotinine and lowest weight babies; however, race was not a significant moderator. Conclusions:Results suggest prenatal smoke exposure has a greater negative effect on birth weight for women endorsing co-occurring depressive symptoms. Findings can inform targeted interventions and assist medical providers with identifying women at increased risk for poor perinatal outcomes. Implications:Despite the common occurrence of smoking during pregnancy and prenatal depression, the interaction between these risk factors on birth weight has rarely been examined. Further, the extant results have been mixed, likely due in part to difficulties in measurement. The current study was the first to use prenatal cotinine to assess bias-free, continuous levels of prenatal smoke exposure. Results indicate that prenatal cotinine was a significant predictor of birth weight only in the context of maternal depressive symptoms. These findings have important implications for mitigating negative perinatal outcomes for pregnant women and their children.
Type
Journal article
Permalink
https://hdl.handle.net/10161/18071
Published Version (Please cite this version)
10.1093/ntr/nty267
Publication Info
Schechter, Julia; Do, Elizabeth K; Zhang, Junfeng Jim; Hoyo, Cathrine; Murphy, Susan K; Kollins, Scott H; & Fuemmeler, Bernard (2018). Effect of Prenatal Smoke Exposure on Birth Weight: The Moderating Role of Maternal Depressive Symptoms. Nicotine & tobacco research : official journal of the Society for Research on Nicotine and Tobacco. 10.1093/ntr/nty267. Retrieved from https://hdl.handle.net/10161/18071.
This is constructed from limited available data and may be imprecise. To cite this article, please review & use the official citation provided by the journal.
Collections
More Info
Show full item record Professor in Psychiatry and Behavioral Sciences
Scott H. Kollins, PhD received his undergraduate degree in psychology from Duke and his Master’s and Doctorate degrees in Clinical Psychology from Auburn University. After completing his clinical internship at the University of Mississippi Medical Center, where he served as Chief Intern, he joined the faculty of the Department of Psychology at Western Michigan University for three years, before joining the Duke faculty in 2000. Dr. Kollins has published more than 125 scientific pap Associate Professor in Obstetrics and Gynecology
My research interests are largely centered around epigenetics and the role of epigenetic modifications in health and disease. My research projects include studies of gynecologic malignancies, including working on approaches to target ovarian cancer cells that survive chemotherapy and later give rise to recurrent disease.  I have ongoing collaborative projects in which we investigate the nature of the Developmental Origins of Health and Disease (DOHaD) hypothesis. DOHaD reflects the ide Professor of Global and Environmental Health
Dr. Zhang joined the Duke Faculty in fall 2013 from the University of Southern California where he had been a professor of environmental and global health and the director of Environmental and Biomarkers Analysis Laboratory since 2010. His prior positions include professor, department chair, and associate dean at the Rutgers School of Public Health. Dr. Zhang has more than 140 peer-reviewed publications. His work has been featured in major international media such as the Time, the New York Ti
Alphabetical list of authors with Scholars@Duke profiles.