Review of The First Frame: Theatre Space in Enlightenment France by Pannill Camp 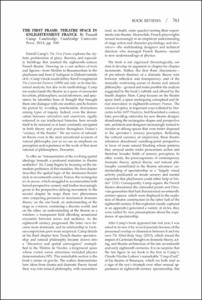 William and Sue Gross Professor
R. Darren Gobert specializes in comparative modern and contemporary Western drama, dramatic and performance theory, and the philosophy of theatre. His publications include The Theatre of Caryl Churchill (Bloomsbury) and The Mind-Body Stage: Passion and Interaction in the Cartesian Theater (Stanford UP), which won both the Ann Saddlemyer Prize from the Canadian Association for Theatre Resarch and the Barnard Hewitt Award from the American Society for Theatre Resear