The Evolution of Supreme Court Justice Confirmation Processes; The Façade of Apolitical Appointments 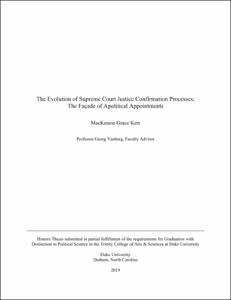 View / Download
328.7 Kb
Date
Author
Kerr, MacKenzie
Advisor
Vanberg, Georg
Repository Usage Stats
88
views
66
downloads
Abstract
The nomination and confirmation processes for filling vacancies on the Supreme Court of the United States are a controversial and misunderstood governmental procedure. Statistically presidents have enjoyed success when appointing members of the Court, but it is the appointment process that has been under considerable pressure despite high confirmation rates. The length of time between naming a nomination and senatorial action varies greatly depending on several significant variables that contribute to a politically polarized process. To understand the entirety of the confirmation processes, both a quantitative analysis and case study approach were taken to explain the political incentives that dictate the proceedings of Supreme Court nominations. I find that the condition of divided government, an increased ideological distance between the president and senate majority party, and the nature of a vacancy being a critical nomination all contribute to an extended confirmation process. These results are seen across decades of nominations as I took data beginning in the Post-Civil War 1866 nomination of Henry Stanbery and ended with the 2018 nomination of Justice Brett Kavanaugh. This suggests important considerations for the way in which we should analyze and view confirmation processes – not by the end result but by the complete procedure.
Type
Honors thesis
Department
Political Science
Subject
polarization
divided government
critical nomination
confirmation process
partisan behavior
ideological gap
Permalink
https://hdl.handle.net/10161/18179
Citation
Kerr, MacKenzie (2019). The Evolution of Supreme Court Justice Confirmation Processes; The Façade of Apolitical Appointments. Honors thesis, Duke University. Retrieved from https://hdl.handle.net/10161/18179.
Collections
More Info
Show full item record